‘Anything he may lack in experience or age, he makes up in commitment,’ Varadkar says 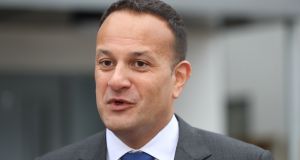 Taoiseach Leo Varadkar has defended the Minister for Health Simon Harris and said the HSE’s practice of passing its problems onto the Department of Health needs to change. Photograph: Niall Carson/PA Wire

Taoiseach Leo Varadkar has defended the Minister for Health Simon Harris and said the HSE’s practice of passing its problems onto the Department of Health needs to change.

Mr Varadkar was responding to an interview in the Sunday Business Post in which the former HSE chief Tony O’Brien described Mr Harris as behaving “like a frightened little boy” during the cervical screen controversy.

“In relation to Minister Harris, all I’d say to people is look at that guy’s record. In the past six months alone, he brought through the referendum to repeal the Eighth Amendment and at long last has enacted the public health alcohol Bill legislation that’s going to save a lot of lives.

“That’s two pretty big achievements by a health minister in six months, and I believe anything he may lack in terms of experience or age, he makes up in his commitment and his compassion,” Mr Varadkar told reporters on Monday.

The Taoiseach said while Mr O’Brien was a “good” public servant, “let’s not forget the circumstances under which he decided to step down early”.

“That was the HSE’s very bad handling of the CervicalCheck controversy which he admits himself was a train wreck and he was CEO at the time,” he said.

Mr Varadkar said Mr O’Brien was right to step down from his position last May, several weeks before his contract was scheduled to expire.

The Taoiseach also said it “wasn’t good enough” for the HSE to pass its problems into the Department of Health.

“Most agencies accept that it’s their responsibility to come in on budget for example, the HSE’s practice for many years now has been to sort of pass the problem on to the department and I think it’s something that has to change, it certainly has to change now that we’ve a record budget for health, an extra €1bn for health next year,” he said.

“If the Department of Education, if CIE, if pretty much every government agency and government body can come in on budget, it isn’t too much to ask the HSE to do so and it’s not good enough they just write letters passing the problem on to the department, that’s just not what people are paid a lot of money to do.”

‘A very frightening time for women’

Minister for Health Simon Harris said he would never apologise for holding people to account, asking health service officials the hard questions and demanding that people do better. He said he did not engage in the politics of personalised attacks.

Speaking on Monday, Mr Harris said he appreciated the comments and support of Vicky Phelan -the Limerick woman whose court case brought the cervical screening controversy to light - in how she had found dealing with him as Minister.

He said following the emergence of the cervical screening controversy it was “a very frightening time for women in this country”.

“My priority was always making sure the needs of those women came first, and I will never apologise for holding people to account, for asking officials the hard questions and demanding people do better.

“I really have nothing further to add other than I am getting on with my job of trying to improve the health service. I am here in Limerick to announce an additional 60 beds and the opening of a new cataract theatre. That is what the people who elected us care about, not name calling,” he said.

Cervical cancer campaigner Vicky Phelan defended the health minister on Twitter on Sunday and said her experience of Mr Harris has been “a man who, far from lacking courage, had to make some hard decisions which did not make him popular but he made them anyway because it was the right thing to do”

Ms Phelan said Mr O’Brien, as head of the HSE, “presided over one of the worst health scandals ever to hit this country”.

“I agree with Tony’s call for changes to the way we treat public servants. I am a public servant myself. I, however, want to see more scrutiny of public servants and real accountability in this country, not less,” she added.

“Until we have real accountability of public servants in this country, enshrined by legislation, we will continue to see more health scandals, more tribunals of inquiry and more public servants who get it wrong.”

Meanwhile, the Chairman of the Public Accounts Committee (PAC) has rejected a description of the committee by Mr O’Brien as “a kangaroo court”.

“I don’t accept the phraseology, but it can be robust,” Sean Fleming (FF) told RTÉ’s Morning Ireland. The committee held a number of hearings on the cervical cancer controversy.

People who “have their homework done” and “have answers” when they come before the committee “get on well,” but people who have responsibility for budgets worth billions of euro and do not provide answers “that does cause problems,” Mr Fleming said.

Mr Fleming accepted that some members of the PAC “can speak aggressively,” but all that can be avoided if the people who come before the committee provide answers when questioned.

“It can all be avoided if they give information.”

Referring to Mr O’Brien’s comment about the CervicalCheck controversy as being “a train wreck,” Mr Fleming said he could understand public upset with “the person driving the train.”

The PAC chairman said he believed that the public wants the committee to “keep the pressure on.”

He said he would be far more concerned if people coming before the committee “felt it was a piece of cake.”

Mr O’Brien had been more interested in politics than the health service in his “exit interview” with the Sunday Business Post, said Mr Fleming.

“I would have been happier if it was more about the health service.”

Mr Harris, has said some accusations leveled during PAC hearings into the CervicalCheck scandal “crossed the line” and were not factual.

Speaking Monday, in Nenagh, Co Tipperary, Mr Harris said: “I think it’s important that that forum [the PAC] is always respectful, and I think, being honest, there is times when it isn’t.”

“I think some of the accusations that were leveled, at that committee, were not borne out by fact, when Dr Scally looked at it.”

He said officials in the public service “have to account” for their actions “by going before the democratically elected representatives of the people and answering questions.”

The Minister said that in the immediate wake of the scandal “there was a genuine fear...about the well being and health of women” which the PAC “tried to respond to, by asking questions”.

However, he said he felt some of the questioning of those - which may have included Mr O’Brien - “got very hot and heavy”.

“I do think, at times, it crossed a line, in terms of some of the accusations that were levelled,” Mr Harris said.

However, he added: “I think we need to be very very careful that we don’t dismiss the importance of democratic accountability and the importance of people answering tough questions. Certainly, I’ll never apologise for asking those who work with me, the difficult questions, that my bosses - the people of Ireland - expect me to ask.”