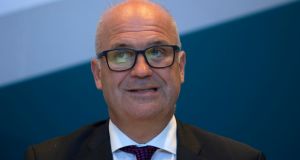 The State’s public health team has warned that “stricter measures” may need to be reinstated if there is an upsurge in cases of Covid-19 following the Government’s decision to accelerate the plan to reopen Ireland.

In a letter to Minister for Health Simon Harris on Thursday, 24 hours before the Government’s announcement on easing the lockdown, the chief medical officer, Dr Tony Holohan, also raised concerns that workplaces had the potential to become “foci” for new clusters of infection as public health measures were eased.

The National Public Health Emergency Team (NPHET) said the “easing of measures always has the potential to increase the risk of transmission of infection”.

The team “acknowledged that there are other important considerations for Government with regard to the reduction of measures, such as social and economic considerations, while noting the potential effects of current restrictions on the wider health and wellbeing of the population”, the letter read.

Dr Holohan said it was “not possible to provide assurance that it is safe to reduce the public health social distancing measures, and stricter measures may have to be reintroduced if a strong upsurge of infection were to occur at some point in the future”.

To minimise the risk of fresh outbreaks, NPHET emphasised “the need for employers, workers and relevant stakeholders to work together to promote adherence to public health guidance and advice appropriate to the relevant sector”.

NPHET also said that people would be asked to “stay local” and travel within 20km from Monday, although the Government decided that people could instead travel any distance within their county from Monday.

Speaking at a media briefing on Friday, Dr Holohan said NPHET still had “concern” over groups of people congregating in shopping centres, which had initially led to the group advising against their reopening in phase two.

He said the organisers of a Black Lives Matter protest on Saturday at the US embassy in Ballsbridge, Dublin, should reconsider the event due to social distancing difficulties.

“Now is not the time to be arranging mass gatherings or events that have the potential to become mass gatherings,” he said, stressing this was not a comment on the motivations of those seeking to protest.

On pubs reopening, Dr Holohan said this should only apply “if a pub is going to operate as a restaurant... and if they’re in full compliance with public health advice in the way a restaurant would need to be”.

“That’s not the same as us saying that a few fellas to get together for a few pints and having a packet of peanuts constitutes a meal, constitutes a restaurant.”

Seven more people have died from coronavirus in the State, NPHET announced on Friday. This brings the total number of deaths from Covid-19 to 1,670.

The number of known cases in the State increased by 28, bringing the total to 25,163.

Of 25,135 cases analysed by the Health Protection Surveillance Centre as of Wednesday midnight, 3,312 people had been hospitalised, and 410 of those required intensive care.

However, there were only 482 “live cases” of people with Covid-19 in the country last week, 215 of whom were in Dublin, according to deputy chief medical officer Dr Ronan Glynn.

In Northern Ireland, one more person was reported to have died from Covid-19, bringing the death toll in the North to 536.

The North’s Department of Health also reported that three more people had tested positive for the virus, taking the number of confirmed cases in the North to 4,776.

In the letter sent to Mr Harris on Thursday, Dr Holohan said that NPHET had met and discussed plans to move on to the next phase of reopening Irish society, and that it was “impossible to predict with certainty what the future trajectory of the Covid-19 disease will be in Ireland”.

NPHET also provided advice for groups of up to six who choose to gather indoors from Monday.

“Rooms should be cleaned regularly with a particular focus on communal surfaces like handrails, door handles and lift buttons, as well as communal areas like bathrooms and kitchens.”

The team advises that people continue to “restrict their close contacts to as small number as possible, and duration of contact should be as short as possible, while also maintaining strict social distancing, two metres.”

“In the case of work colleagues and the wider circle of friends, it is important that people continue to avoid spending time in direct contact with people outside their household or immediate circle. The development of micro-communities is specifically recommended.”