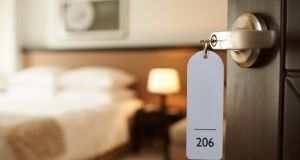 Hotels will be omplementing dozens of measures including hygiene and social distancing. Photographs: iStock

Irish hoteliers and tourism groups have reacted with relief to news that the re-opening of key elements of the sector has been fast-tracked by the Government although they also highlighted difficulties facing it in the months ahead.

From the end of June hotels will be able to resume trading and many already have put in place detailed plans for what they anticipate will be a high level of pent-up demand among domestic tourists in July and August.

The general manager of the Celtic Ross hotel in Roscarbery, Co Cork Neil Grant said bookings in May had grown by almost a third when compared with the same period last year with the length of time people were looking to stay in the hotel doubling.

“People are planning to stay a little bit longer and that is really what we need because we have to put so much into cleaning rooms in between guests,” he said.

He expressed confidence in the plans put in place with regards to sanitizing the hotel, social distancing and managing the guest traffic with a one way foot flow system express check-in and check-out. He said capacity would be restricted to 50 per cent of normal. “We are taking slowly slowly approach to make sure we get things right.”

The owner of the Abbeyglen Castle Hotel in Clifden Brian Hughes said his hotel would be opening with a significantly reduced level of capacity and he stressed that he was more concerned with getting safety measures right than getting bookings in.

“I am confident that once the hotel is back up and running the bookings will come. We are going to gradually open, intitially in a small way with a reduced number of staff in a manner that we feel is safe. We are lucky in that we have a lot of space inside and outside the building.”

Michael Lennon of the Wesport Woods Hotel describe the fast-tracked opening of Irish tourism as “great news”. He pointed out that July and August are the two best months of the year for business in the regionn and said the booking trends had been good.

“People really do have the grá to travel,” he told The Irish Times. “But there is war going on with this virus and we all have to do whatever it takes to keep it at bay.”

He said the hotel would be implementing dozens of measures including hygiene and social distancing and would be using its larger function rooms as restaurants and outdoor spaces to ensure people were able to holiday safely.

The Irish Hotels Federation, which represents about 1,000 hotels and guest houses, said many had already begun to adapt their services and facilities in anticipation of reopening at the end of the month.

Some 85 percent of hotels have been closed since March, with the remainder available to only essential workers.

President of the federation Elaina Fitzgerald Kane said the health and safety of employees and guests would remain the overriding priority.

She also welcomed the announcement that the temporary wage subsidy scheme was to be extended. “This is a significant development as it will help tourism businesses including hotels to keep their teams together and supported financially during the re-start phase,” she said.

Also welcoming the move to reopen hotels from the end of the month, Eoghan O’Meara Walsh of the Irish Tourism Industry Confederation said: “This is vital to the industry and to regional Ireland and the longer the season we can have, the better,” he said.

“We are delighted the government has listened to the industry and give it the chance to reopen and start trading again.”

He pointed out that as 70 per cent of the Irish tourism market was made up of visitors from overseas, “all the bets are going to be on the domestic market.”

Research being carried out by Fáilte Ireland and to be published next week suggests that there is demand among Irish people for trips within the country. Just over half of people will holiday in Ireland over the next six months with safety and hygiene are paramount when it comes to holiday planning.

According to the research holidays are important to people for good mental health and taking a “safe break” has emerged as a key element in their planning. People are now planning, scanning and booking.