Covid-19: Seven more people have died from coronavirus in the State, with 28 new cases 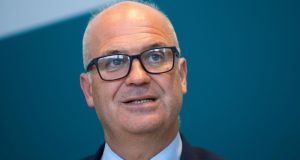 Pubs being permitted to reopen and operate as restaurants would not mean several people meeting up “for a few pints and having a packet of peanuts”, the State’s chief medical officer, Dr Tony Holohan, has said.

Pubs will be permitted to reopen along with restaurants and cafes on June 29th, provided they function along the same lines as restaurants, and adhere to public health guidance on the coronavirus pandemic.

“The intention is if a pub is going to operate as a restaurant . . . and if they’re in full compliance with public health advice in the way a restaurant would need to be, then there wouldn’t be a reason why that activity [reopening] couldn’t happen,” Dr Holohan told a daily press briefing.

“That’s not the same as us saying that a few fellas to get together for a few pints and having a packet of peanuts constitutes a meal, constitutes a restaurant,” he said.

Speaking earlier on Friday, Taoiseach Leo Varadkar said pubs operating as restaurants would not need a restaurant licence to do so, but would have to follow several conditions.

“So that will mean table service, socially distant, but not people sitting at a bar, or, you know, hanging around, standing, as you might like to do in a pub,” he said.

Of 25,135 cases analysed by the Health Protection Surveillance Centre as of Wednesday midnight, 3,312 of them had been hospitalised, and 410 of those required intensive care.

However, there were only 482 “live cases” of people with Covid-19 in the country last week, 215 of whom were in Dublin, according to deputy chief medical officer Dr Ronan Glynn.

Retail outlets reopening from Monday must not open before 10.30am, to avoid public transport becoming congested with both shoppers and essential workers travelling to work, Dr Holohan said.

The advice from Nphet to the Government on advancing to phase two of the roadmap to reopen the country stated that retail outlets should open on Monday, but not shopping centres.

However, the Government took the decision on Friday to allow malls and shopping centres to reopen on June 15th, if measures were in place at these sites to ensure that people cannot congregate.

Speaking at an evening briefing on Friday, Dr Holohan said Nphet still had “concern” over groups of people congregating in shopping centres, which had initially led to the group advising against their reopening in phase two.

Dr Holohan also said that the organisers of a Black Lives Matter protest planned for this Saturday at the US embassy in Ballsbridge, Dublin, should reconsider the event due to social distancing difficulties.

“Now is not the time to be arranging mass gatherings, or events that have the potential to become mass gatherings,” he said, adding that that was not a comment on the motivations of those seeking to protest.

As the country continued to lift the coronavirus restrictions it was “not going to be possible to police every household”, he said.

Public health officials would be reliant on people voluntarily complying with advice, and it would be difficult to stop people who wished to ignore the guidance or exploit “loopholes”, he said.