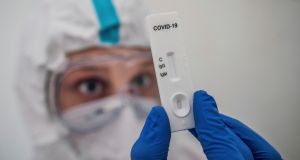 Almost one fifth of healthcare workers in a large Dublin hospital have antibody evidence of infection with Covid-19, a much higher rate than in the general population, according to a new study. File image: Michael Kappeler/dpa via AP.

Almost one fifth of healthcare workers in a large Dublin hospital have antibody evidence of infection with Covid-19, a much higher rate than in the general population, according to a new study.

Antibodies to SARS-CoV-2, the virus that causes Covid-19, were found in 18 per cent of staff at Tallaght Hospital who participated in the study.

This figure rose to 20 per cent for staff with roles involving more patient contact, and was 13 per cent for those with less patient interaction.

Before the study, 12 per cent of participants had been diagnosed with Covid-19 at some point, based on a positive swab result.

When this group was excluded, the seroprevalence among those never confirmed to have infection was 7.5 per cent.

This is significantly higher than the overall estimated national seroprevalence of 1.7 per cent, and higher than reported in similar studies in hospitals in other countries where restrictions were imposed.

However, the study notes that over half of staff who had never tested positive for Covid-19 but were shown to have antibodies suspected that had been infected at some point.

Many said they had had symptoms or knew that they had been in contact with a case. Some of the symptoms they reported, such as loss of smell and taste, were not recognised as being due to Covid-19 earlier in the pandemic and so did not meet testing criteria.

“These results demonstrate that a high proportion of COVID infection in healthcare workers goes undetected,” according to Tallaght consultant microbiologist Dr Anna Rose Prior. “It supports the requirement for universal mask use for all patient interactions during the pandemic, both to protect staff but also to minimise the risk of staff unknowingly transmitting infection to patients.”

She said the study, which allowed for identification of staff who did and didn’t develop a measurable immune response to the virus, would be continued for 12 months.

This would provide information on how long a measurable level of antibodies to Covid-19 remained present in staff, and also how many staff develop these antibodies during coming waves of infection.

Almost 1,200 staff volunteered for the study, about one-third of total staff.

Up to one-quarter of all Covid-19 infections in Ireland have been among healthcare staff.