Permanent supports for home working must be put in place, engineers suggest 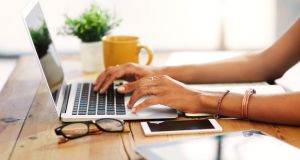 In supporting the case for facilitating home work on a long-term basis, the IAE cites CSO figures indicating the toll commuting has taken on the country in the past. Photograph: iStock

If home working is adopted “in whole or in part as a permanent lifestyle”, the benefits in wellbeing; improved air quality and reduced carbon footprint could transform Ireland, according to an independent think-tank.

The Irish Academy of Engineering (IAE) says a greener future is possible “if the country is willing to learn the lessons of the Covid-19 pandemic”.

In its latest analysis the body suggests the past few months have provided new perspectives and experiences, “which will help guide the country to successfully overcome the other major challenge of our time, climate change”.

IAE president Dr Jim Browne, said: “One of the key lessons... is that during the crisis the public demonstrated an enormous capacity for positive behavioural change. It also showed people’s willingness to support evidence-based direction and leadership in response to a major challenge.”

The same spirit of social solidarity “can and should be harnessed by the new Government to address the much greater challenge of climate change”, he added.

In supporting the case for facilitating home work on a long-term basis, the IAE cites CSO figures indicating the toll commuting has taken on the country in the past.

Apart from the human productivity cost of “this massive downtime”, the cost in fuels and environmental impact of emissions must also be considered, Dr Browne added.

In contrast,the IAE highlights that during the height of the lockdown, traffic pollution in Irish cities fell by 50 per cent. “Resulting improvements in air quality, and the benefits of not having to commute, will lead to more people working-from-home, at least on a part-time basis,” the IAE suggests.

The academy recommends public policy “should be fully aligned with any trend away from exclusive reliance on the static office working environment and provide whatever supports are needed to encourage and reinforce the emergent ‘no commute’ culture”.

This will have implications across land use planning; balanced regional development, home design, public transport, personal taxation, and access to broadband, it adds.

The most practical way to build consensus, avoid undesirable social and economic outcomes and achieve the goal of a sustainable, decarbonised economy is by re-tasking the Citizen’s Assembly, it suggests – and is “the most equitable way of transitioning to a decarbonised, sustainable economy with key milestones in 2030, 2040 and 2050”.

“One of the main lessons from the ongoing Covid-19 experience is that people were prepared to take coordinated, shared action to overcome a major challenge. They are also willing to embrace new ways of living. Governments north and south must now pivot this same mindset into encouraging a society-wide consensus about how best to confront climate change, as well as the challenge of developing a sustainable economy,” Dr Browne said.

The IAE is an independent, not-for-profit think tank whose membership comprises many of the most experienced and distinguished engineers and technologists in Ireland. Its fellows provide of their time on a pro bono basis with the goal of advancing social and economic wellbeing of the island of Ireland.