Just over 3% of Republic’s general population infected compared to 4.31% in North 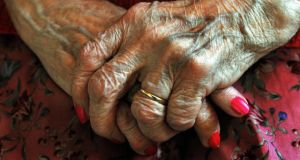 Outbreaks in nursing homes in Ireland and other European countries help to skew data on deaths for older age groups, rendering cross-country comparisons of the scale of the pandemic inaccurate, researchers say. Photograph: John Stillwell/PA

Older people in Ireland, North and South, have been among the most disproportionately affected internationally for deaths from Covid-19, a new study indicates.s

The gap between the number of actual virus deaths in over-65s and the number that might be expected on a population basis is greater in Northern Ireland and the Republic than in 43 other countries, apart from Belgium and Scotland.

Due to the large number of nursing home deaths in Ireland, the burden of Covid-19 mortality has hit older people here to a greater extent than almost anywhere else, the research by scientists at the University of Cambridge and Institut Pasteur in Paris shows.

Simply comparing total deaths across countries may provide a misleading representation of the underlying level of transmission of Covid-19, because of large differences in virus death rates in elderly populations in different countries, according to the study published in leading scientific journal Nature.

Outbreaks in nursing homes in Ireland and other European countries help to skew data on deaths for older age groups, rendering cross-country comparisons of the scale of the pandemic inaccurate, researchers say.

A better way of comparing countries is to look at deaths among under-65s, they suggest.

“Simply comparing the total number of deaths across countries can be misleading as a representation of the underlying level of transmission of Sars-CoV-2, the virus that causes Covid-19. Most deaths are in older people, but they are the least comparable across countries,” said O’Driscoll, a UCC graduate and PhD researcher in the University of Cambridge’s department of genetics.

“Our model shows the number of Covid-19 deaths by age, in people under 65 years old, is highly consistent across countries and likely to be a reliable indicator of the number of infections in the population. This is of critical use in a context where most infections are unobserved,” she says.

An estimated 3.12 per cent of the population of the Republic had been infected with Covid-19 on September 1st, compared to 4.31 per cent in the North, the study says.

This compares to an average of 5 per cent across the 45 countries examined for the study, and much higher figures in some countries hit by the pandemic – over half the population of Peru, for example, has been infected with the virus.

The infection-to-fatality ratio (IFR)for the Republic is estimated at 0.51 per cent, meaning that about one of every 200 Irish people who contract the virus will die. This is different from the case-fatality rate, which relates deaths to confirmed cases.

Ireland’s IFR is “quite a bit lower” than for other European countries because of our younger population demographics, O’Driscoll explains. “However, individual-level risks are much greater for older people, those with co-morbidities and particularly for nursing home residents.”