Figures from Department of Health cause ‘deep unease’ within Government 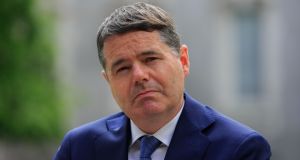 Health spending has sharply accelerated in recent weeks, leading to fears in Government of further overspending in the sector this year.

The Government had budgeted for gross current health spending – which was given an outlay of €17 billion this year – to increase 5.8 per cent compared with the previous year.

The latest figures up until the end of last month show it is in fact running 8.9 per cent above 2018 levels, sparking fears there will have to be another supplementary estimate for the department later in the year.

The Irish Fiscal Advisory Council (Ifac) this week singled out increases in spending over and above what has already been budgeted for as one of the main factors in the “fast pace” of expenditure growth. The Ifac report said the Government’s medium-term spending plans were “not credible”.

The issue of controlling the public finances has become a major political flashpoint, with Fianna Fáil, whose support is needed to pass the budget, criticising the Government for failing to rein in spending. Fine Gael has countered that Fianna Fáil wants to placate various interest groups by spending more money.

Taoiseach Leo Varadkar and Minister for Finance Paschal Donohoe have both said they will heed the criticisms from Ifac. But the latest spending figures from the Department of Health have caused “deep unease” and alarm within Government.

They are contained in the Government’s latest fiscal monitor. The corresponding figures for the end of April actually showed the increase in spending coming in at 5.6 per cent, slightly below target. However, the figures for the end of March showed an increase of 9 per cent year on year, again significantly above initial estimates.

Although the department’s own estimates are broadly in line with expectations, they are viewed with scepticism by the Department of Public Expenditure. Numerous Government sources said the year-on-year figures were taken far more seriously than the estimates.

Well-placed sources said there was concern within the Department of Public Expenditure about the emerging trend, and said it could mean the Department of Health would spend significantly more than its original budgetary allocation.

Recent years have seen overspending pressures mount towards the end of the year, due to larger hospitals seeking more money than had been anticipated.

Senior Government figures, however, said a supplementary health estimate may not necessarily be provided and warned the Department of Health “is going to have to get its house in order”.

The rate of health spending growth would have to slow significantly in the coming months for the Department of Health to come in on target.

Paul Reid, the new director general of the HSE, has warned his senior managers that the agency must break even in 2019.

In an internal memo sent when he took up his new role last month, Mr Reid said the health service would no longer spend money it did not have and breaching budgets could “no longer be considered an option”.

“We must deliver a financial break-even in 2019, while prioritising the safety of those services that can be delivered within our budget,” he said.