Report finds loneliness is damaging to health and wellbeing of older adults, the loneliest of whom had poorer quality of life and health 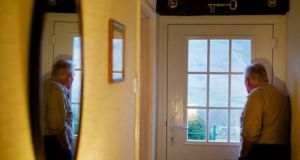 “Loneliness is a growing public health concern as there is clear evidence that feeling lonely is damaging to the health and wellbeing of older adults.” Photograph: Getty Images

One-third of older Irish adults say they feel lonely some of the time, according to a new report, which found “worrying” levels of isolation among over-50s.

Loneliness is most prevalent among over-75s and those living alone, the study by researchers in Trinity College Dublin found. It was also found to be damaging to the health and wellbeing of older adults, the loneliest of whom had poorer quality of life and health.

Depression is found in tandem with loneliness, with more than three-quarters of the most lonely group reporting depressive symptoms compared to just 7.4 per cent of the least lonely group.

The research is part of the ongoing Irish Longitudinal Study on Ageing of adults aged 50 and older in Ireland. This analysis is based on responses from up to 8,000 participants.

Almost 10 per cent of older adults are socially isolated, meaning they have one or no regular social contacts, but isolation is more prevalent in Dublin than in rural areas. Some 7 per cent says they often feel lonely.

However, objectively measured social isolation and subjective loneliness do not always overlap; one in five of those with high levels of social contact still reported feeling lonely.

The study suggests a link between loneliness and education levels, with those who left school after primary level almost twice as likely to be “most isolated” with few social contacts compared to those who attended third level.

Dr Mark Ward, the lead author of the study, said it provided clear evidence of the need to address loneliness among the older population.

“Loneliness is a growing public health concern as there is clear evidence that feeling lonely is damaging to the health and wellbeing of older adults.

“This report highlights the fact that certain groups of older adults are particularly vulnerable to loneliness and social isolation. In particular, older adults who live alone are more socially isolated and report greater feelings of loneliness.”

Loneliness and social isolation are not a necessary fact of the ageing process, the authors emphasise, so efforts to alleviate these “potentially damaging” phenomena should be encouraged.

“There is a need to address both the subjective and objective features of loneliness in order to positively impact the wellbeing of older adults.”

The report is due to be launched by Minister of State for mental health and older people Jim Daly, who last May announced a €3 million mental health fund to help community organisations combat isolation.