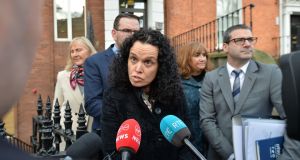 Nurses have said that all elective admissions to hospitals as well as all out-patient appointments scheduled for January 30th will be cancelled by the HSE due to a planned strike next week.

The Irish Nurses and Midwives Organisation (INMO) said the planned stoppage over pay and recruitment and retention issues was still set to go ahead on Wednesday of next week.

It said health service management had tabled no proposals aimed at resolving the union’s concerns at talks on Monday.

INMO general secretary Phil Ní Sheaghdha said the union had referred the matter to the Workplace Relations Commission, and that the HSE had agreed to attend a hearing which is now expected to take place on Wednesday.

“Unfortunately there are no real measures coming forward at all to resolve the dispute,” she said after talks with the HSE in Dublin on Monday. “All the indications seem to be there is no real intent or focus on resolving the dispute.”

Minister for Health Simon Harris is expected to brief the Cabinet on Tuesday about the planned strike.

Ms Ní Sheaghdha said that as part of contingency arrangements to be announced by the HSE, all elective or non-urgent admissions as well as out-patient appointments would be cancelled.

“The employers understand that after nurses withdraw their labour they will not be able to cope with anything other than the bare emergencies that require to be provided in the health service.”

The HSE on Monday did not confirm that all elective admissions and out-patient appointments would be cancelled on January 30th.

It said management had taken part in talks s around contingency planning arrangements and these discussions would continue.

The Department of Health said after talks with nursing unions on Monday: “ It was not possible to make progress today and the unions indicated that they would be referring the matter to the Workplace Relations Commission conciliation service. Management were supportive of this approach, and will co-operate with such a referral.”

The department said the group that oversees compliance with the current public service agreement had also invited nursing unions and management to talks on Tuesday.

The Minister urged the parties “to use the time remaining to work towards reaching a resolution to this dispute and avoid this industrial action”.

The Psychiatric Nurses Association separately plans to put in place an overtime ban on January 31st, February 1st, 5th and 6th, and then to escalate its campaign of industrial action to full strikes on February 12th, 13th and 14th.

The unions argue that healthcare staff such as physiotherapists receive about €7,000 more each year for a shorter working week, and are seeking pay parity.

The Government has argued these demands would cost €300 million, and could lead to knock-on claims by other public service groups. It believes this could undermine the existing public service pay agreement.

On foot of recommendations made by the Public Service Pay Commission, the Government last autumn proposed a package of improved allowances and greater access to promotional posts for nurses in an attempt to deal with the recruitment and retention issues. These proposals were decisively rejected by members of the INMO and PNA in ballots.