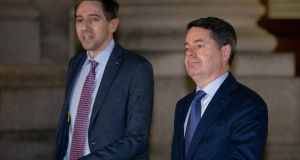 An eleventh-hour agreement was reached between the Government and nurses on Monday night to avert a three-day strike due to begin on Tuesday morning which would have thrown the health system into chaos.

But the proposed agreement, brokered by the Labour Court and which must be voted on by 40,000 nurses, came at the price of pay increases for nurses that could threaten the wider public sector pay agreement.

Ministers insisted that the proposed agreement, which is likely to be approved by Cabinet on Tuesday morning, did not contravene the terms of the existing public sector deal.

However, senior Government sources acknowledged that the special deal for nurses would likely see pay pressures, already simmering in several areas of the public service, increase.

The Health Service Executive says it will do everything it can to restore normal services following the Irish Nurses and Midwives Organisation’s (INMO) decision to suspend the strike.

“We expect outpatient appointments to go ahead as planned and advise anyone with an appointment for Tuesday, Wednesday and Thursday to attend,” a spokeswoman said. “We are advising surgical patients that they will be contacted by their hospital if their procedure is going ahead. We expect that Emergency Departments will be extremely busy and we would ask the public to only use these services if absolutely necessary.” Minor injury clinics will operate as normal from Tuesday.

If the deal is approved some 26,000 nurses and midwives will receive €1,200 on average in additional payments.

The agreement would see a new grade which many nurses can transfer to for higher salaries, and while some nurses would see a salary rise of almost €2,500, or more than 7 per cent, this includes pay increases already due.

Overall the proposed deal would be worth an average 2.5 per cent for nurses and midwives, with bigger increases among younger and newly-qualified nurses.

The agreement also sets out a series of productivity requirements and other workplace reforms.

The proposed deal will cost €10million to €20 million to implement this year after changes to a previously-announced Government initiative to tackle the two-tier pay system for nurses recruited in recent years are taken into account, The Irish Times understands.

The Government is also hoping that the productivity measures and a reduction in the €114 million a year bill for staff provided by employment agencies will generate further savings.

While Minister for Finance Paschal Donohoe refused to divulge details of the expected total cost of the nurses’ package before he briefs the Cabinet on Tuesday morning, The Irish Times understands the proposals could cost between €25 million to €35 million in 2020. The total public sector pay bill is €19 billion.

The proposals allow the Government to revisit the pay increases if the projected savings do not materialise.

On foot of the Labour Court recommendation, the Irish Nurses and Midwives Organisation (INMO) and the Psychiatric Nurses Association (PNA) suspended their plans for further strikes.

While the proposed agreement is nowhere near the 12 per cent sought by nurses, there are fears in Government that other public sector unions will follow the nurses’ example.

On Monday night Mr Donohoe insisted that the agreement did not breach the public sector pay agreement, but the largest public sector union Fórsa said it would study the recommendation to see what implications it had for other unions.

The news came as patients were bracing themselves for three days of disruption to hospital services which Government feared would have thrown the health service into chaos.

Minister for Health Simon Harris pledged that the health service would do all it could to “catch up on what has been the lost time of the last number of days”.