February 9th, 2019: Tens of thousands of people attended a rally in Dublin city centre in support of the nurses’ campaign for pay improvements to tackle recruitment and retention issues. 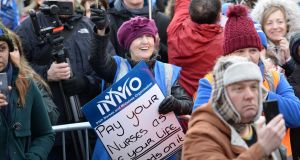 Supporters of a nurses and midwives protest at Merrion Square on Saturday linked to the now suspended nationwide strike. Photograph: Alan Betson

The bottom line of the proposed new deal to end the wave of strikes by nurses is that many nursing personnel will end up with more money coming out of the dispute than they had at the start.

However, many of them will end up with less than they hoped and a lot less than the 12 per cent their union was seeking.

It would be hard to categorise the Labour Court recommendation as a cave-in by the Government. But it is a managed retreat from a hardline position which leaves question marks over the future of the public sector pay agreement.

The Government had argued consistently over recent weeks that outside of the provisions of the existing pay deal there would be no additional remuneration provided for nursing staff during the lifetime of the current accord, which runs until the end of 2020.

Minister for Public Expenditure and Reform Paschal Donohoe insisted last night that the additional payments on offer under the Labour Court recommendation would not breach the current accord.

However, the Government is not the final arbiter of whether this is the case or not.

In November 2016, Donohoe and the then minister for justice Frances Fitzgerald maintained that a €50 million package of measures recommended by the Labour Court to avert a threatened strike by gardaí was within the framework of the Lansdowne Road public service pay accord that was then in place.

Other unions begged to differ and within a few weeks the Government had to bring forward a wage rise for all other public service staff at an additional cost of €120 million.

Last night, the country’s largest public service trade union, Fórsa, said it would study the detail of the Labour Court recommendation regarding the nurses’ dispute, “and any implications it may have for other civil and public service grades”.

“We expect that other unions will do the same, and that the Irish Congress of Trade Unions Public Services Committee will consider the matter in due course.”

Mr Donohoe declined to set out the cost of the new proposals or to be specific as to where the money to fund them would come from. He said he first wanted to brief the Cabinet on Tuesday.

However, the Health Service Executive had indicated previously that there was no money in its budget for this year to meet the cost of additional pay rises for nurses.

While many in Government may be wary about the potential cost of the nurses’ deal, there is no doubt Ministers will be very pleased and extremely relieved that the strikes scheduled for three consecutive days this week have been suspended.

Throughout Monday there seemed to be a well-designed choreography in place that led to the planned strikes being called off at teatime.

Shortly after lunch, the Labour Court said it would formally intervene in the dispute after reflecting on informal contacts it had had with unions and management over the weekend.

A Labour Court hearing was quickly convened followed by the speedy issuing of a recommendation aimed at ending the dispute.

Within an hour, the executive committee of the Irish Nurses’ and Midwives’ Organisation had agreed to suspend the planned strikes while Donohoe and Minister for Health Simon Harris waited inside Government Buildings to emerge and welcome the developments.