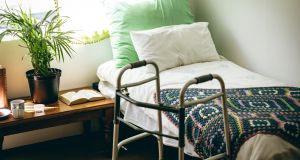 Under Level 3 restrictions, visits to nursing and care homes are suspended, aside from critical and compassionate reasons. Photograph: iStock

At least 45 further coronavirus cases were confirmed in nursing home residents in seven new outbreaks reported in the past week, the National Public Health Emergency Team told the Government.

The disclosure of the seven new outbreaks in nursing homes – eclipsing the number reported in each of the previous four weeks – was among the warnings made by NPHET as it recommended moving to Level 5, the most severe restrictions, for four weeks to break transmission chains.

The Government rejected the recommendation and has decided to put the entire country on Level 3 restrictions, the level Dublin and Donegal were set at last month.

Under Level 3 restrictions, visits to nursing and care homes are suspended, aside from critical and compassionate reasons.

The State’s chief medical officer Dr Tony Holohan told the Government in a letter that there were now 31 open outbreaks in nursing homes. This is down from 38 at the end of last month.

An outbreak is declared closed when there are no new cases for 28 days.

Nursing homes are among the most susceptible congregated settings that are vulnerable to Covid-19 given its higher mortality rate amongst the elderly population.

Residents of nursing homes account for more than half of the 1,810 virus-related deaths.

Fine Gael TD Fergus O’Dowd, a member of the Oireachtas Covid-19 committee, said the number of new outbreaks in nursing homes was a “great worry”.

“They are the most vulnerable people in the country. Any increase in Covid that gets in there can be obviously devastating for nursing homes,” he said.

Tadhg Daly, chief executive of Nursing Homes Ireland, the representative body for privately-owned nursing homes that represent 80 per cent of the sector, said Dr Holohan expressly referencing seven new clusters and nursing homes in the letter was a “cause of concern”.

“There is a responsibility on Irish society to redouble our efforts because community transmission is clearly the biggest predictor of an outbreak in a nursing home,” he said.

Mr Daly welcomed NPHET’s close monitoring “because at the outset of the pandemic one of our significant concerns was the focus was almost exclusively on the acute hospital system”.

The Laois Nationalist reported that Kilminchy Lodge had told relatives about 18 cases last Friday, though sources said that, including positive staff cases, the number was closer to 30.

A spokeswoman for Kilminchy Lodge would not comment on the figures or the outbreak.

The majority of residents at the home, which has about 40 residents, are believed to have tested negative for the virus. Further tests have been carried out on staff and residents.

New HSE figures for the third cycle of serial testing of asymptomatic nursing home staff, aimed at identifying Covid-19 cases to prevent outbreaks, has shown an increased positivity rate on the previous two cycles of testing over the summer.

In the third cycle of mass testing across 568 homes since September, the HSE has so far found 138 positives after taking almost 42,000 swabs, representing a positivity rate of 0.33 per cent.

If Covid-19 is detected in a nursing home staff member, all residents are checked by the HSE as part of outbreak testing. Serial testing is regarded as an effective way to prevent outbreaks.