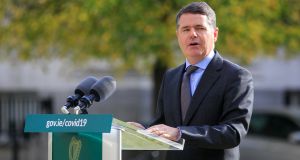 Minister for Finance Paschal Donohoe: has said liability will be spread over four years, starting in 2022. It will most likely be paid by way of a reduction in tax credits, reducing take-home pay. Photograph: Gareth Chaney/Collins

Three-quarters of taxpayers believe the Government should waive tax bills that most people never understood they were building up under Covid wage subsidy schemes.

At the time, it was a critical support for companies struggling to keep operating and for their workers. More than 663,000 people availed of the payment at some point. It has since evolved into the employment wage subsidy scheme which is paid at a lower rate.

The money was paid without any tax being deducted by Revenue. Many people, who were used to tax being deducted at source, assumed there was no tax liability due for the payments. This was reinforced for them as the money they received was equal to or less than they normally received after tax from their employer.

However, the Revenue Commissioners stated that tax would be liable on the payments and that the amounts due would become clear at the end of the tax year.

Minister for Finance Paschal Donohoe announced last month that Revenue would spread the collection of any income tax, PRSI and universal social charge due over four years, starting in 2022. It will most likely be paid by way of a reduction in tax credits, reducing take-home pay.

He described it as a “welcome development”, which would “significantly ease any potential burden on those with a tax liability as a result of availing of these schemes”.

A survey by Taxback.com found the majority of respondents felt the tax bill was unfair and should be waived.

“The fact that 75 per cent of respondents to this survey, some of whom may have been placed on the TWSS and others who have not, indicated their desire for the tax to be waived, is perhaps a reflection of what people throughout the country are feeling,” said Marian Ryan, consumer tax manager at Taxback.com.

“Covid-19 has taken a significant financial and mental toll on many families and there’s a widespread appreciation that people simply don’t need any further financial worry or stress.”

She noted the additional tax would be due even though people didn’t earn any more income during the pandemic. Employers were not permitted under the scheme to pay their workers more to cover the tax bills.

She argued that notification of the tax bill was still very likely to come as a major shock to thousands of people throughout the State. A previous Taxback.com survey during the summer found 57 per cent of respondents were not aware they may be subject to an additional tax liability.

“We would call on government to consider waiving this additional tax burden for those taxpayers in receipt of the TWSS as they derived no additional income from being on the scheme.”

1 Admission of mistake in Oxford vaccine dose raises doubts over reliability
2 Karlin Lillington: How I managed to cut my mobile phone bill by at least half
3 Irish Life fund pays €49m for 94 Dalkey apartments
4 Cliff Taylor: Deal or no deal we are now heading for a hard Brexit
5 Central Bank rules out changes to mortgage rules during pandemic
6 State may face €1bn in compensation in Covid-19 case, Press Up claims
7 Smarter ways to heat your home: Eight of the best modern systems
8 Fiona Reddan: Who’s afraid of Revolut? Not AIB and BOI it seems
9 Pandemic supports will be removed once effective vaccine is rolled out, Government warns
10 Danish retailer Jysk on track to double Irish store numbers by end of 2021
Real news has value SUBSCRIBE
Save money on international transfers