Dr Tony Holohan, Chief Medical Officer with the Department of Health has said that compliance by the public in relation to use of face coverings is not where the HSE would like it to be. Video: RTE News Now 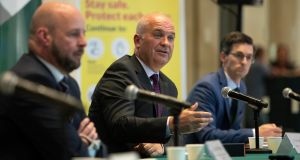 The next two weeks are “critical in limiting transmission” of Covid-19, Prof Philip Nolan, chair of the NPHET Irish epidemiological modelling advisory group has said.

The National Public Health Emergency Team (NPHET) briefing on Thursday was told the reproduction number, a measure of how many people a confirmed case goes on to infect, now stands at between 0.4 and 0.8.

An R-number below one indicates the virus is being eliminated.

“It is how we interact, as we go about our daily lives more freely, that will determine whether it increases,” Prof Nolan said.

All indicators of the disease are stable or declining at present, Prof Nolan said.

The number of new cases per day fell to 14 this week from 50 the previous week.

The number of deaths each day last week averaged five, down from a peak of 33.

The average number of tests done per day has fallen from 4,747 in mid-April to 2,547 now as the incidence of the virus has fallen.

“We’re doing more than enough testing,” Prof Nolan said, adding that most cases now were isolated instances, or in households or families.

Public health officials also said the wearing of face-covering in indoor settings is to remain optional. NPHET decided not to vary its advice on face-masks following a discussion at its meeting on Thursday, chief medical officer Dr Tony Holohan said.

Pressure has been growing for the wider and/or compulsory wearing of face-masks to protect against the spread of Covid-19 in certain settings.

However, the group decided to stick with its existing recommendation for the non-mandatory use of face-coverings in circumstances where social distancing is a challenge, such as shopping and public transport.

Officials agreed to begin a communications campaign next week to encourage greater compliance with its advice on face-coverings.

A further eight deaths of people diagnosed with Covid-19 were reported by NPHET. This bring to 1,703 the total number of deaths in the Republic.

NPHET also reported another eight new cases of the disease at its briefing on Thursday. This brings the total number of cases to 25,238.

“NPHET has recommended the development and implementation of a national communications campaign to increase compliance with current recommendations on the use of face-coverings,” Dr Holohan said.

“The campaign will outline best practice for use of face coverings in retail outlets, on public transport and in other public locations, where it may be difficult to maintain social distancing.”

Officials recognised they would have to redouble their efforts to get across the message on face-coverings as compliance from the public was insufficient, he said. Retailers could play a role in promoting this guidance.

“Perhaps what we think is consistent advice hasn’t been heard as a clear and consistent message,” he told the briefing, adding there had been a difference of opinion on masks here and in other countries.

Many people commenting on the issue don’t have “the appropriate skills or knowledge base”, he added. While much higher usage of masks was needed, it would be inappropriate to make them mandatory given the evidence base and the difficulties some people have in wearing them.

There are currently 88 confirmed cases of Covid-19 in hospital. Of these, 28 are in intensive care.

An analysis of cases up to Tuesday shows 57 per cent are female and 43 per cent male.

A total of 8,114 cases are associated with healthcare workers.