New coronavirus strain: What is it and should we be worried? 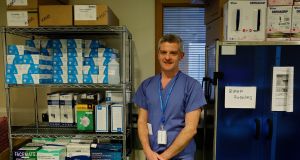 Prof Paddy Mallon: If the new strain is easier to transmit, it could force a fundamental change in how the Government controls the virus. Photograph: Alan Betson

A new, more infectious strain of coronavirus reported in parts of Britain has led to the Government and other countries including Germany and Italy to impose a ban on travel from Britain.

The Government said that in response to the new strain of the virus detected in the southeast of England, it was banning all flights for at least 48 hours from midnight on Sunday.

It is common for viruses to mutate and there have been thousands of variants of the virus identified since it first emerged at a fish market in the Chinese city of Wuhan more than a year ago.

What has British public health officials worried is they have said this latest virus mutation enables the virus to bind more efficiently to cells within the body and that it has been shown to be more infectious and have the potential to make more virus once infection is established in the body.

This is coinciding with increased spread in London and the southeast of England that is leading UK public health officials to suggest this stain is more efficient at infecting and transmitting between people.

“While it is known and expected that viruses constantly change through mutation leading to the emergence of new variants, preliminary analysis in the UK suggests that this variant is significantly more transmissible,” said the European Centre for Disease Prevention and Control (ECDC) in a threat assessment note published on Sunday.

Initial findings from Britain suggest this variant could increase the reproduction number – the rate at which it spreads – by 0.4 at least, says the ECDC note. This means there could be a further four infections for every 10 people infected, with an increased transmissibility of up to 70 per cent.

Should we be worried?

“There is a lot that we don’t know about it but, from what we do, I would be very worried mainly because the UK public health officials are suggesting this variant of the virus spreads more easily and there is some laboratory data to show that it is more infectious,” said Prof Paddy Mallon, an infectious diseases consultant at St Vincent’s hospital in Dublin and at UCD.

There is nothing to suggest that the new strain will affect the Covid-19 vaccine, he said, but there was a “theoretical potential” that people who had Covid could be reinfected by this strain.

If it is easier to transmit between people, this has the potential to force a fundamental change in how the Government controls the virus and the strategy of “living with Covid-19” with the five levels of restrictions on public movement, mixing and economic activity, according to Prof Mallon.

Given that more infections would mean more people become seriously ill from Covid-19, which in turns means more strain on hospitals, the Government could be forced to apply severe restrictions for longer and abandon the idea of rolling restrictions and relaxation of measures, if there is a new strain in the community that spreads more.

This possibility, in Prof Mallon’s view, justifies the 48-hour ban on travel from Britain to allow surveillance of the “sequencing” of virus detected in the State to see if the mutant is circulating here.

Other scientists say the data is not there yet to conclude this strain is more transmissible.

Dr Anne Moore, a lecturer in biochemistry and cell biology at UCC, says it is likely that this mutant virus could infect cells better and might be “more fit to replicate” but that theoretically does not mean it is more transmissible. Further studies are required to determine this, she said.

Akke Vellinga, an epidemiologist at NUI Galway, said: “We can just see that it is spreading really fast through a population where this new variant spreads faster than what was there but that is survival of the fittest, that is how the virus adapts.”