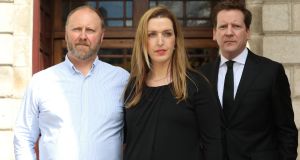 Fourteen new cases involving women affected by the CervicalCheck cancer screening controversy have been lodged in the High Court over the past month.

Court records show a surge in the number of cases as women who received false negative smear tests lodge claims.

In most cases, they allege that missed cancer warnings or quicker detections could have resulted in earlier medical intervention and the women avoiding unnecessary and, in some cases, life-changing surgeries.

The legal proceedings have been filed against the two US-owned laboratories, Medlab Pathology and Quest Diagnostics, that carry out testing for the CervicalCheck national screening programme.

Nine of the new cases have been taken by Co Tipperary solicitor Cian O’Carroll, who handled the case taken by Limerick woman Vicky Phelan. Her High Court settlement in April led to the disclosure that the screening programme had failed to tell scores of women diagnosed with cervical cancer about incorrect smear tests prior to their diagnosis.

Most, if not all, of the women behind the new cases are among the 221 that the HSE has identified as having received incorrect tests in the past, as revealed in subsequent clinical audits.

“The common thread in the cases is that there is an expert who has given an opinion that the women had one or more prior smear tests that were significantly under-reported,” said Mr O’Carroll.

“The only question is whether the degree of the under-reporting amounts to a breach of duty in law, and it is on that basis that we have brought legal proceedings.”

The new cases are in addition to Ms Phelan’s case, the €7.5 million settlement reached by Co Kerry mother of five Emma Mhic Mhathúna last month, and another case settled last month by a woman known only as “Mrs K” whose action was the first to be settled by the New Jersey-based Quest Diagnostics.

Medlab and Quest carried out more than 90 per cent of the tests for CervicalCheck. Questions submitted to the labs about the new cases went unanswered.

Women taking the five other new cases are represented by law firms in Dublin, Cork and Donegal.

Dublin solicitor Fintan Lawlor said he was representing one woman in a case against Quest and the HSE. She is claiming that her cancer was missed in smear tests and that she was not told about a clinical audit revealing the incorrect tests until September 2017. He is also advising two other affected women.

“It is a disgrace and shocking,” he said. “It is not just the first offence of the false negative smear tests misdiagnosing the women, but the second offence that they were not told about them until some time later.”

The other solicitors either did not return calls to The Irish Times or declined to comment.

Independent TD Catherine Murphy, a member of the Public Accounts Committee which has questioned why women are being forced to take legal actions over the scandal, said she was not surprised that so many more women were suing because the courts were the only “route” to mediation.

She questioned why the Taoiseach had made a promise that the State would settle with the women and then pursue the labs for damages if this was an option that was not legally open to the Government.

“If it is not possible to do as the Taoiseach announced, they need to make that clear so people who are very sick are not waiting around for something to happen that may not happen,” said Ms Murphy.

“The Government really needs to rethink that and come out to clarify the situation; it’s only fair they do that in as timely a way as possible.”

The State Claims Agency, which defends actions against the HSE, said earlier this month that there were 40 claims relating to the CervicalCheck controversy, comprising 35 active claims, three settlements and a further two potential cases.

Ciarán Breen, the agency’s director, told the Public Accounts Committee on July 12th that the women must first issue a legal letter of claim to start the formal engagement to seek compensation.

In Emma Mhic Mhathúna’s case the State and the lab had decided to “take to one side” the issue of how to apportion liability so as not to involve the plaintiff in the dispute between the parties, he said.

“That is working quite well,” he said. “The laboratories have been co-operative and we have a system in place whereby we are mediating these cases and arriving at settlements.”

In some cases, however, sick women are being forced to sit through hours of mediation without any offer of compensation being made.