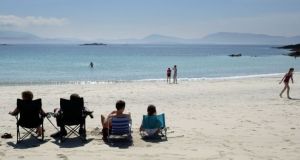 Children could be protected from sunburn when swimming by wearing UV long-sleeved swim suits and sun hats, Helen Forristal, director of nursing services at the foundation the Marie Keating Foundation has suggested. Photograph: Frank Millar

Parents are being warned to take “extreme care” in protecting their children from the sun’s harmful rays during the ongoing heatwave.

The Marie Keating Foundation cancer support group have called for parents to be “extra vigilant” in keeping their children out of the sun during the hot weather.

Speaking on Wednesday, Helen Forristal, director of nursing services at the foundation, said infants and children should be kept out of the sun between 11am and 3pm and factor 50 sunscreen should be applied every two hours to ensure no spots are missed due to sweating, clothes rubbing or swimming.

Extra care should be taken with babies under six months as their skin contains very little melanin, the pigment which gives skin, hair and eyes their colour and which also provides protection from the sun, said Ms Forristal.

“Often parents put their children in t-shirts to protect them from the sun, and while we do promote ensuring that everyone is properly covered from the sun, it’s important to note that light-coloured, open weave fabrics do not offer much protection from the sun and wet t-shirts that children wear in the pool or the sea, offer even less protection,” she said.

“If possible, ensure children are always covered up wearing long-sleeved, closely woven clothing, preferably in dark colours. A great idea for the pool or by the sea is to use those UV long sleeved swim suits to ensure their skin is adequately protected when swimming and keep their heads covered with a sun hat.”

Temple Street Children’s Hospital reported earlier this week that it had seen a spike in the number of children presenting with serious sunburn since Monday, June 25th, and issued a nationwide appeal to parents to protect babies and children from intensive UV rays. Six children have been treated at the hospital for serious sunburn in the past week.

Dr Nandini Kandamany, consultant in emergency medicine at Temple Street hospital said four children have also been treated for burns from barbecues over the last month and she expects to see more of these cases.

“The message we would like to get out is about the re-application of sun cream, people always forget. They lather it on at the start of the day and forget to reapply. It should be reapplied every two hours,” she told The Irish Times.

Dr Kandamany said one of the children treated for serious sunburn had declined sun cream.

“Sometimes kids don’t want the sun cream on and parents have to insist they don’t allow their children outdoors if they don’t have sun cream on. They have to be the parent, kids can’t dictate,” she said.

Met Éireann has said the hot, dry weather is set to continue into the end of next week with temperatures reaching 30 degrees this weekend.