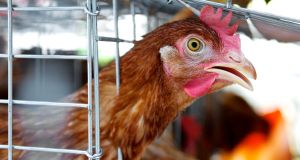 The Department of Agriculture is considering taking the unprecedented step of ordering poultry farmers to bring their flocks indoors amid the ongoing avian flu outbreak in Europe.

Such an order has never been made before in this country. But in a meeting with people in the industry on Monday officials from the department confirmed that the decision to house all birds is under review given the threat posed from migratory species.

Authorities across mainland Britain have already urged farmers and bird enthusiasts to keep their animals indoors for 30 days over December and early January following the discovery of the deadly H5N8 strain of the disease in France and Poland recently.

Irish chicken, egg and turkey producers are reluctant to follow suit as this would lead to produce losing free-range and organic status according to the Irish Farmers’ Association’s poultry committee chairman Nigel Renaghan, who was at the meeting.

“It was the feeling of most of the people there that we would like to be proactive by keeping birds indoors for a period of time,” he said, in a plea for the Government to establish a so-called Avian Influenza Prevention Zone as has happened in Scotland, England and Wales.

Mr Renaghan warned that disinfecting farms only has a limited effect in inhibiting the spread of the disease. He said he is fearful for the poultry industry’s reputation should there be an outbreak in Ireland.

“The reality is if you have a free-range or an organic unit and birds are going outside to pasture, wild birds flying over can contaminate the site so you’re running a risk.

“If it comes in and it’s put in a newspaper that avian influenza has touched into Ireland, even though it has no effect on humans there is that [negative] perception. And the fear is that people may not eat as many eggs or as much poultry, which in turn causes its own problems,” he said.

Ireland produces some 70 million chickens annually, along with 4 million turkeys and close to 600 million eggs.

The majority of poultry operations are located close to the Border, but Northern Ireland has so far avoided implementing any formal prevention zone.

Despite outbreaks of avian flu actually reaching Ireland and Britain in the past, the virulence of the current strain in Europe coupled with the onset of peak winter migration season has led authorities to be particularly cautious.

Some 7,000 infected ducks have already been slaughtered in the south of France, although the World Health Organisation believes that risk of transmission to humans remains relatively low for the H5N8 strain.