Zika virus ‘can replicate’ in foetal brains and after birth 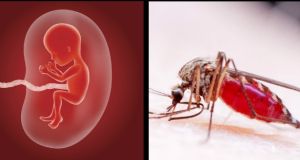 In one case, researchers also found evidence of the virus growing in an infant with microcephaly who died two months after birth. Photographs: Getty Images

US researchers have found evidence of the Zika virus replicating in foetal brains for up to seven months after the mother became infected with the virus and they showed the virus can persist even after birth, according to a study published on Tuesday.

The findings confirm earlier observations from case studies suggesting that the mosquito-borne Zika virus can grow in foetal brains and women’s placentas.

“Our findings show that Zika virus can continue to replicate in infants’ brains even after birth, and that the virus can persist in placentas for months – much longer than we expected,” said Julu Bhatnagar, lead of the molecular pathology team at Center for Disease Control’s (CDC) Infectious Diseases Pathology Branch and the study’s chief author.

The findings help explain how the virus causes devastating birth defects and pregnancy losses even if a woman had only a minor illness. Last month, the World Health Organisation declared that Zika no longer constitutes an international emergency, but stressed the need for a long-term effort to address the virus, which has been linked to thousands of birth defects and neurological complications.

For the study, CDC researchers tested tissues from 52 patients with suspected Zika virus infection, including brain tissues from eight infants who had microcephaly and later died.

They also tested placental tissues from 44 women – 22 of whom delivered apparently healthy babies and 22 whose pregnancies ended in miscarriage, abortion, stillbirth or who delivered babies with microcephaly.

Zika has been shown to cause microcephaly, a rare birth defect in which infants are born with under-sized heads and brains, which can cause life-long disability.

The researchers found Zika genetic material in foetal brain tissue and placentas more than seven months after the mothers contracted the virus. In one case, they also found evidence of the virus growing in an infant with microcephaly who died two months after birth.

Of the eight infants who had microcephaly and later died, all tested positive for Zika. The mothers of all eight of these infants contracted Zika during the first trimester of pregnancy, adding to prior evidence that Zika is most dangerous early in pregnancy.

“We don’t know how long the virus can persist, but its persistence could have implications for babies born with microcephaly and for apparently healthy infants whose mothers had Zika during their pregnancies,” said Mr Bhatnagar, whose findings were published in CDC’s Emerging Infectious Diseases journal.

There are no treatments or vaccines for Zika, which previously had been seen causing only mild disease.