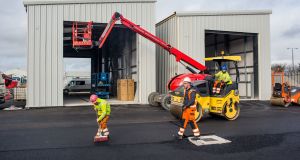 Minister for Public Expenditure and Reform Paschal Donohoe said the Office of Public Works (OPW) has spent €7.8 million to date on acquiring and developing physical infrastructure for use at the two ports and the airport.

The Minister revealed the spending on infrastructure for a no-deal Brexit in response to a parliamentary question tabled by Fianna Fáil’s finance spokesman Michael McGrath.

The State has taken control of a 13,000sq m warehouse at Dublin Port previously owned by businessman Harry Crosbie, and purchased 16 acres outside Rosslare port that was owned by car dealer Bill Cullen.

Both men lost control of the properties in the financial crash. Mr Donohoe did not provide a breakdown of the State’s spending on the individual properties.

The State fast-tracked the takeover of the former Crosbie warehouse and the Rosslare property for inspections of goods and containers should the UK leave the EU without a deal on March 31st. The Brexit date has since been extended until October 31st.

No-deal facilities at Dublin Port include 33 inspection bays for trucks coming off ships, parking for 270 trucks, a dedicated border control post for live animals, and office accommodation for 144 additional staff.

Facilities have been developed at Dublin airport for a public reception with six counters and office space for 20 staff, and a border control post for checks on veterinary, forestry and animal food products. These will include seven inspection rooms as well as ambient, chilled and freezer storage units.

Under a plan to cope with a hard Brexit, the Rosslare land would be used by Revenue Commissioners officials and Department of Agriculture veterinary inspectors to carry out customs, food and animal health checks.

The property was purchased from a local haulage company called Baku GLS, which bought it in 2015.

Rosslare plans to build a permanent customs, inspections and security compound on a four-acre site within the port with 13 inspection bays for trucks, 35 truck parking spots and a dedicated border control post for live animals. It is not expected to be completed for three years.

Tánaiste Simon Coveney has said the Government was setting aside more than €700 million of State funds for infrastructure, recruitment and supports in the event of a hard Brexit that he hoped would not be needed. The Government wants the EU and UK to maintain a close future relationship that would not require checks.