Coronavirus death toll in Republic now at 1,319 as 16 people die

Total of 125 outbreaks of Covid-19 reported in private houses 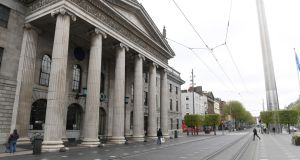 A further 16 people diagnosed with Covid-19 have died in the Republic, the National Public Health Emergency Team disclosed on Monday.

It was the lowest daily figure in about three weeks.

There have now been a total of 1,319 deaths associated with the disease in the Republic, it said in its latest update on Monday evening.

Another 266 new confirmed cases were also reported. This brings the total number of cases to 21,772 .

Data released by the HSEon Monday showed the number of outbreaks of Covid-19 in private homes has almost doubled in the space of a week.

There were 125 outbreaks of the disease reported in private homes up to last Friday, according to the latest epidemiological data from the Health Service Executive. This compares to 68 a week earlier.

An outbreak is defined as two or more cases in the same residential unit.

The number of people who have confirmed cases of coronavirus in ICU beds stayed below 100 for a third day on Sunday but the HSE figures show some hospitals have no availability or little availability of such beds needed for the most serious cases of the disease.

The largest single location for outbreaks remains nursing homes, where the number of clusters of the disease increased from 197 to 222 over the same period.

Six more coronavirus-related deaths have been recorded in Northern Ireland, according to figures released on Monday by the North’s Department of Health (DoH).

It brings the total number of hospital fatalities to 387.

The figures include five deaths in the 24 hours until 9.30am on Monday and a further fatality which had already taken place but which had not previously been reported.

An additional 69 patients tested positive for coronavirus out of 1,103 individuals tested in the last 24 hour period, bringing the total number of confirmed cases in the North to 3,836.

The North’s first minister said progress had been made in the Northern Ireland Executive on plans to relax coronavirus restrictions.

Arlene Foster pledged that the restrictions would not be kept in place “any longer than is absolutely necessary” but said that “until then we need you to work with us” by continuing to follow social distancing and other measures to limit the spread of the virus.

The Executive met on Monday in the first in a series of meetings this week to discuss how Northern Ireland will emerge from lockdown.

No details of the proposals have yet been made public, but ministers have repeatedly warned that any changes will be introduced gradually and are likely to be based on criteria rather than calendar dates.

The deputy first minister, Michelle O’Neill, said the Executive was “working through all the issues that will help us to reach conclusions about what our pathway to recovery is going to look like, what any changes in restrictions might look like.

“We’ve had a lengthy discussion today about what that means and we will publish that plan as soon as we possibly can, hopefully later this week,” she said.

According to data released by the Northern Ireland Statistics and Research Agency (NISRA) on Friday, which records deaths in all settings, including care homes and hospices, the number of fatalities in Northern Ireland is at least one-third higher than the figure reported daily by the DoH.

NISRA recorded 393 coronavirus-related deaths in the period until April 24th, as compared to 299 recorded by the DoH.

Ms Foster said she wanted to give the public a sense of the processes that were shaping the Northern plan. “Many of you are anxious for us to produce the plan immediately,” she said, but it was “important the Executive remains focused on getting it right.”

She said social distancing and other measures were “likely to be with us for some time”, and the challenge was “how do we loosen the restrictions in a way that is science-led, proportionate and above all, not going to expose our society to another spike in infection.”

In fashioning their plan, Ms Foster said, ministers would be guided by the latest medical and scientific evidence and modelling.

They were also, she said, assessing the capacity in the health and social care system and “the wider health, societal and economic implications of the current restrictions to determine which areas would pose the least risk and create a greatest benefit if we were to relax them.”