The Minister for Employment Affairs and Social Protection, Regina Doherty, says the Government will not be cutting wages as changes to the Pandemic Unemployment Payment scheme are announced. Video: RTÉ 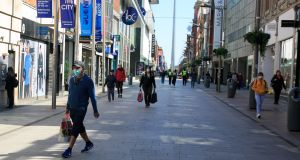 A memo for the Cabinet meeting says the temporary wage subsidy scheme and the unemployment payment will remain in place until the end of August. File photograph: Gareth Chaney/Collins

The scheme which sees the State subsidise the wages of about half a million workers is expected to be extended until the end of the summer by the Government.

The Cabinet is also expected to extend the special Covid-19 unemployment payment for the same period, although it will be split into two bands.

Those earning less than €200 will be on the first band and will receive €203 a week, in line with unemployment benefit, and those earning above €200 will still receive the current €350 payment.

A memo for the Cabinet meeting says the temporary wage subsidy scheme and the unemployment payment will remain in place until the end of August, with a decision on what to do at that point expected to be made by the next Government.

Meanwhile, hundreds of pubs are expected to reopen weeks earlier than anticipated at the end of the month as they have restaurant licences.

Sources have said the Government will give the green light for the move in the coming days following meetings with industry figures. Chief executive of the Licensed Vintners Association Donall O’Keeffe said while his group was awaiting final clarification, hundreds of pubs are in “full-scale active planning” for reopening.

Under the Government’s roadmap for reversing Covid-19 restrictions, pubs are not due to reopen until August 10th. A senior source confirmed that those with restaurant licences will be permitted to open their doors on June 29th.

The State’s National Public Health Emergency Team (NPHET) has also signed off on additional restrictions being lifted in the second phase of lockdown relaxations due to come into effect on Monday.

The opening of larger retail stores is to be brought forward and will see some bigger shops open from next Monday, though Penneys has said it will not be in a position to do that.

The lifting of travel restrictions from 5km to 20km will also proceed as planned from Monday.

Minister for Health Simon Harris said on Thursday night that “all the indicators look good” in relation to moving to the next phase of easing restrictions.

“I expect tomorrow I will hopefully be in a position to proceed with phase two,” he said.

But he cautioned that moving from one phase to the next was “not inevitable and not guaranteed”. And he said there were no current plans to change the social distancing guidelines from two metres to one.

It comes as a further five deaths of people diagnosed with Covid-19 were reported by NPHET on Thursday. This brings to 1,664 the total number of deaths in the Republic.

NPHET also reported another 38 new cases of the disease, bringing the total number of cases to 25,142.

Chief medical officer Tony Holohan warned that house parties are being organised “with abandon, as though we weren’t in the midst of a pandemic”.

There were good public health reasons for “these things” not to happen at present, he said, adding indoor activities would be permitted in later phases of the Government’s roadmap.