Landmark study reveals ‘substantial’ impact of heavy drinking on others 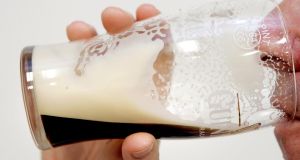 Heavy drinking costs others some €873m annually, a new HSE study has found.

Heavy drinking has a “clearly substantial” impact on family, friends, colleagues and strangers, and costs others some €873 million annually, a new study has found.

The Untold Story: Harms Experienced in the Irish Population due to Others’ Drinking states that children are most negatively affected, especially in low-income families, experiencing verbal abuse and witnessing serious violence in their homes.

One in seven workers said that drinking by a colleague has been significant in their workplace, with extra work hours and days lost impacting on their ability to do their job.

It also finds that one in two people “have been bothered and harassed, felt afraid and unsafe from strangers’ drinking” and that two in five people are stressed and threatened, and have experienced familial difficulties, from drinkers they know. The study outlines how drinking can impact on a range of relationships but does not estimate the intangible costs (fear, pain, suffering and lost quality of life) that it has on others.

Robin Room, University of Melbourne professor of alcohol policy research, who wrote the foreword to the report, said that while it confirmed what is happening elsewhere (including Australia where there is high-level drinking, especially at weekends), it was a landmark survey in identifying costs on others – in effect, doubling the annual financial cost of alcohol abuse.

“For many years, the focus in discussing harms from drinking was on harms suffered by the drinker... what has been missing from the picture is the burden that occasional or regular heavy drinking imposes directly on others at the interpersonal level.”

He said a good first step was to adopt the Public Health Alcohol Bill, set a minimum unit price for alcohol and reduce its availability.

Dr Hope said that given three in five people reported a known heavy drinker in their life, it “suggests the risk of harm from others’ drinking is widespread in Irish society”. The most common harms reported due to strangers were sleep disturbances and “perceived threats to personal safety”.

Prof Barry said he hoped the findings would inform national policy as it showed the scale of alcohol harm on others for the first time, in much the same way environmental tobacco harms non-smokers. It also belied the observation of heavy drinkers who say: “I take a few drinks; it doesn’t harm anyone”.

“This report provides solid evidence that harms to others from drinking are at least as widespread and of comparable magnitude to the harms to drinkers themselves,” he said.

Women were most at risk in domestic settings while men carried the burden more in the workplace, Mr Byrne said. The findings underlined the need to update Irish licensing laws, which were the most complex in the world, to ensure such harms were reduced and to ensure public safety, he added.

However, he noted the Bill was proceeding at the pace of an snail, with “the drinks industry trying to trip it up at every corner”.

Alcohol Action Ireland said the report offered the most comprehensive view of the scale of alcohol harm.

“For too long the harms experienced has been passively disregarded; this report demonstrates not only the tangible impacts on the many but also the significant psychological impacts felt today and harboured for the future,” the group’s spokesman Eunan McKinney said.

“It comes at a time when any critical analysis of our pervading alcohol culture is routinely dismissed by the alcohol industry, and their surrogates, as anti-business and counter to popular belief.”

The report’s total estimate of €873 million represents costs to the individual and society. The largest element of the cost of harm to others (53 per cent) is the cost of caring for the known heavy drinker. The second most significant cost is out-of-pocket expenses, such as damage to property and ruined clothing or other possessions. The cost of seeking help from law enforcement and health services accounts for €127 million of the total, while workplace costs are estimated at €123 million.