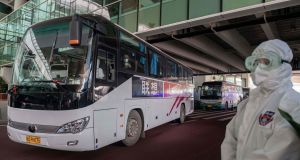 A bus carrying members of the World Health Organization team investigating the origins of the Covid-19 pandemic leaves the airport following their arrival in Wuhan on January 14th, 2021. Photograph: Nicolas Asfouri/AFP via Getty Images

Mainland China has reported its first Covid-19 death in eight months, as a team of experts from the World Health Organisation (WHO) landed in Wuhan to investigate the origins of the pandemic.

The delegation will quarantine for two weeks before beginning their inquiries. Their arrival, which was live-streamed by state media, came after almost a year of negotiations with the WHO, and diplomatic spats between China – which has been trying to change the narrative about where the virus came from – and other countries who demanded it allow a “robust” independent investigation.

No details of China’s 4,635th death were provided on Thursday, except that the person was in Hebei province, the main site of China’s worst outbreak in months and where new lockdowns have been imposed on tens of millions of people. It is the first death from the disease since May.

China’s national health commission reported 138 new cases of confirmed Covid-19, and 78 new asymptomatic cases, which they count separately. It is the highest daily tally in China since March and comes just weeks before the start of the busy new year holiday period.

Of the 138 cases 124 were local transmissions including 81 in Hebei province, which surrounds Beijing, and 43 in the north-eastern Heilongjiang province. All new cases in Heilongjiang were close contacts or secondary close contacts of earlier infections in a Wangkui county village, authorities said.

In response authorities have locked down major cities home to tens of millions of people, and enacted tough travel restrictions. Anyone seeking to enter Beijing for work from surrounding Hebei must provide proof of employment and a negative test.

The coastal city of Shanghai has forbidden entry to residents of designated streets within middle-high risk areas, and those from elsewhere in the designated areas will be subject to 14 days quarantine on arrival and testing. The regulation was announced on Wednesday and is valid until the end of March.

Authorities are pushing ahead with a drive to have 50 million people vaccinated before the lunar new year period begins on February 11th, and travel has been discouraged or banned in some sectors and provinces.

On Tuesday Dr Zhang Wenhong, director of a Shanghai hospital’s infectious diseases department, said the outbreak would take at least a month to be controlled, and called for the vaccination program to speed up so authorities could get ahead of virus mutations.

The outbreak has alarmed officials, as each day this week recorded numbers not seen since early 2020, when the city Wuhan was still under its then-unprecedented lockdown.

The WHO team includes virus and other experts from the United States, Australia, Germany, Japan, Britain, Russia, the Netherlands, Qatar and Vietnam, who will begin consulting immediately with Chinese counterparts via videolink while they complete quarantine.

A Chinese government spokesman said this week the WHO team would “exchange views” with Chinese scientists but gave no indication whether they would be allowed to gather evidence.

A “scientific audit” of records and safety measures would be a “routine activity”, said Mark Woolhouse, an epidemiologist at the University of Edinburgh. But that depended on how willing Chinese authorities were to share information.

The WHO team were en route to China a week ago but some members had to turn back after Beijing announced they had not received valid visas. It prompted a rare criticism from the head of the WHO, but Beijing said it was a “misunderstanding”. - Guardian