Doctors to be allowed admit errors without accepting liability 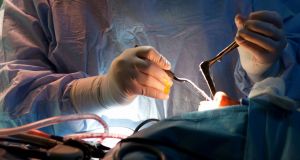 Doctors will be allowed to admit to mistakes or accidents in their treatment of patients without accepting personal liability under new measures to be introduced by the Government.

Minister for Health Simon Harris has received Cabinet approval to introduce a voluntary open disclosure scheme which will give medical professions legal protection for any information given following a patient safety incident.

An apology cannot be interpreted as an admission of liability and cannot be used in any legal proceedings that may proceed.

It will not prevent any litigation but the measure is aimed at reducing the number of negligence cases taken against the State.

“Saying sorry and expressing regret when something goes wrong should not be a last resort in our health service,” Mr Harris told The Irish Times.

“It is important that where an apology is warranted it is made when the facts of the incident are known and not years later in the High Court. ”

It was due to be mandatory open disclosure but advice from the Department of Health’s chief medical officer, Tony Holohan, advised against such a provision.

Mr Harris will insist the policy will not provide for protections for incompetent, negligent or other unprofessional patient care.

The cost of meeting medical negligence claims is continuing to rise, with the final figure for this year likely to reach €300 million.

In 2014, claims relating to obstetrics cost some €58 million, of which €47million related to cerebral palsy claims.

This represented an 80 per cent rise on the 2010 figure of €32 million for maternity services claims.

Mr Harris says the scheme aims to change the culture in the medical profession.

“Disclosure and reporting provide opportunities to learn, improve, address errors that have happened and apply the lessons to make the service safer for all patients.”

New legislation will not be introduced but Amendments will be made to the Civil Liability (Amendment) Bill 2017 in the Seanad.

Fianna Fáil spokesman on health Billy Kelleher said it was disappointing the scheme was not mandatory.

He said the voluntary provision needed to be monitored closely to ensure it is effective.