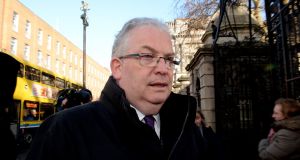 The health service will not survive the next five years in its present form without major reform, the director general of the Health Service Executive has said.

Tony O’Brien said a “tidal wave of demand” was overtaking the health service and tough decisions were needed to develop the capacity to deal with the challenges such as an ageing population and the rise of chronic diseases.

He said this reform would require the creation of a broad political consensus on what changes needed to be made.

The forthcoming report from the Dáil committee on the future of healthcare would offer some political consensus on how to plan services for the next decade, he told a conference organised by the Royal College of Physicians of Ireland (RCPI).

People have an “absolute obligation” to get behind the report, as not to do so would condemn the country to further “flip-flop policies” and lead to a once-in-a-generation opportunity being thrown away.

Mr O’Brien said his role as chief executive and chairman of the state’s largest organisation broke every rule of corporate governance and needed legislative reform. This would distribute governance throughout the system and end the situation where a single national organisation was responsible for planning and delivering health services.

Hospital groups were set up over three years ago, yet none has a statutory basis or a board with any real authority, he pointed out.

Leo Kearns, chief executive of the RCPI, called for a “Whitaker moment” for the health service similar to the initiative taken by civil servant TK Whitaker in re-aligning Irish economic policy in the 1950s.

The health service needed to be “turned on its head” but no changes should be made without the existence of sustained political consensus.

Prof Tom Keane, who reformed cancer services in the Republic a decade ago, described long waiting times for hospital services as “one of the most glaring examples of inequality in western democracy”.

Describing the delays in accessing services as “astonishing” and “unbelievable unacceptable”, he warned things would only get worse if action was not taken.

It was no exaggeration to say the health service was at a tipping point and “total systems failure” was not far away.

Jimmy Sheehan, founder of the Blackrock Clinic, asked if Mr O’Brien had the courage to tell politicians they are making a “monumental” mistake by siting the new national children’s hospital at St James’s Hospital.

Mr O’Brien said this - the opening of another argument - was an example of what must not happen when the report on the future of the health service was published. The children’s hospital was 30 years overdue and the project needed to go ahead, he said.