New service to allow GPs to treat patients via smartphones 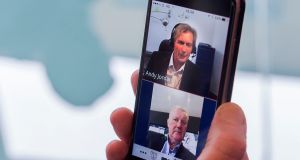 The first tele-medicine service that allows patients be treated by their GPs using a smartphone is to be launched on Friday .

The service, GP Online, is being piloted in six doctor surgeries in urban and rural locations from next week and it will be rolled out nationally during the year.

The National Association of GPs, whose members are funding the initiative, predicts that up to 100 family doctors will be offering video consultations by the end of the year.

Online medical consultation is a major growth area in health, and several national and international companies are active in the Irish market.

This is the first service to allow patients talk to their own GP from the comfort of their home or office.

“The advantage is that patients are talking to the doctor who is familiar with their medical history and has all their records to hand,” GP online chief executive Aiden Callaly said.

The service operates via an Apple or Android app and can be used on a smartphone, tablet or laptop computer.

GPs hold about 24 million consultations a year, of which 7 million are with private patients.

Mr Callaly believes up to one million private consultations could move online in the initial phase.

The GPs can provide online treatment for “anything that doesn’t require a physical examination”, he said.

Most of the initial demand is expected to come from patients requiring repeat prescriptions or those unable to leave home or work for a face-to-face appointment.

As the technology develops, it is expected that basic medical checks, such as blood pressure, pulse and blood sugar levels, will be carried out online .

Doctors who opt to provide the service will pay €35 a month for the connection and set their own fee levels for patients.

The Irish Times trialled the service during the week. Using an iPhone in our city centre offices, I contacted Tallaght GP Andy Jordan.

“I’m not for a minute saying this is going to replace face-to-face contact with your doctor,” Mr Jordan said, using a headset that leaves his hands free to type up medical notes .

To test the service, I asked Dr Jordan whether my knee, still swollen after a fall three weeks ago, requires medical attention.

I described my symptoms, and a scan of the affected area with my camera-phone assists him in his diagnosis.

The resolution is sufficient to allow him see the bruising and he tells me I have bursitis and it will hopefully clear up within a few weeks. Having seen the doctor without leaving my office, it is time to go back to work.