Covid-19: Pharmacies may not be able to handle a second wave, group warns 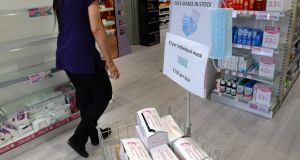 A pharmacists’ group has warned that its members may not be in a position to meet the challenge of a second wave of Covid-19 infections. File photograph: Dara Mac Dónaill/The Irish Times

A pharmacists’ group has warned that its members may not be in a position to meet the challenge of a second wave of Covid-19 infections hitting the State if the Government does not provide supports to their sector.

The Irish Pharmacy Union (IPU) said that during the first phase of the coronavirus pandemic the Government had “poured resources into sustaining GP services” but that pharmacies were “ignored”.

The union is urging the Government to put in place a package of supports for its members as part of the July economic stimulus plan, which is to be announced this week.

It is seeking a commercial rates waiver for essential healthcare businesses this year, with a further reduction next year; a scheme to protect pharmacies and other essential businesses from excessive rent demands, and the extension of the temporary wage subsidy scheme until next year and a commitment to its removal being phased.

“Pharmacies are recognised as an essential healthcare service, but they are also businesses, and it is unreasonable to expect them to bear the soaring costs of providing services for the State during a pandemic,” IPU secretary general Darragh O’Loughlin said.

“The costs have included installation of protective screens, personal protective equipment, and additional staff. All of these are primarily designed to keep the public safe while still providing an essential service. Had pharmacies not stayed open, they would not have incurred these costs. It is hard to shake the feeling that we are being punished for staying open and fulfilling our duties.”

Mr O’Loughlin said pharmacies in Northern Ireland had received a £20 million (about €22 million) support package, “while in this jurisdiction we have received no support from the Department of Health”. He said an absence of support meant that if a second wave of Covid-19 infections did happen in the autumn, “we cannot be confident that pharmacy services will be maintainable”.

Meanwhile, the HSE has told hospital managers making plans for operating health services amid restrictions in place due to Covid-19 that there were a range of work practice reforms and flexibilities that had been “agreed and paid for” under deals agreed over the last decade but had not been widely implemented.

In a letter to hospital group and community healthcare organisation chief executives dated July 6th, the HSE’s employee relations service said that while it stressed the importance of consulting with staff representatives in a timely way, this did not “confer [to them] a right to veto, in respect of proposed changes that are already agreed and paid for”.

It said, for example, that since December 2008 all new employees of the HSE and HSE-funded agencies were liable to work rosters necessary to deliver extended services beyond Monday to Friday.

It said that under public service agreements an extended working day running from 8am to 8pm was provided for, with staff working the same number of hours but with different attendance patterns.

It said there was also provision for staff to be redeployed within a 45km distance without compensation. It said the agreements also allowed for a greater range of services in community settings through primary care teams and social care networks, including the provision of such services at evening time and weekends.