Cara and Hickey’s among those accused over multiple dispensing fees 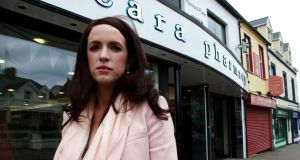 Ramona Nicholas: the pharmacies include Cara, whose directors include Ms Nicholas of RTÉ’s ‘Dragon’s Den’, and the Hickey chain, which has 28 outlets

The Health Service Executive (HSE) is seeking the repayment of €10 million in dispensing fees it believes was overclaimed by a number of pharmacy chains.

The pharmacies include Cara, whose directors include Ramona Nicholas of RTÉ’s Dragon’s Den, and the Hickey chain.

The companies deny the HSE’s allegation that they wrongly claimed multiple payments from the State for single prescriptions presented by medical-card holders, by phasing the dispensing of the medicines involved.

The HSE has sent legal letters to the companies raising concerns about their phased dispensing practices and communications have been under way for some weeks between lawyers on both sides.

Reimbursements to some pharmacies have been withheld since September while a review is under way.

Last year, Lloyds, the State’s biggest pharmacy chain, made a €12 million payment to the HSE in settlement of a year-long dispute over phased dispensing. Since then, it has widened its investigation within the pharmacy sector to include other major chains.

Sources close to the case say the move underlines the HSE’s determination to pro-actively monitor the practices of contracted professionals, including doctors and pharmacists.

A spokesman for Cara accused the HSE of “bullying” the company, insisting it was “100 per cent compliant” on phased dispensing. “The regulations are clear and we would not do anything to breach them,” he said.

The spokesman said Cara’s dispensing fees have been withheld for the past four months but it was doing “everything possible” to recoup them from the HSE. “There is no contractual reason for withholding these monies. Our shops have been audited regularly by the HSE over the past 10 years and there have been no issues.”

Cara, which is fully owned by Ms Nicholas and her husband, Canice, operates 13 pharmacies, mostly in the west and northwest.

Hickey’s, which has 28 outlets and annual sales of more than €50 million, did not respond to requests for comment.

Lloyds operated a system that involved putting a patient’s monthly medication into four separate trays, one for each seven-day period. The drugs were supplied to the patient in a single visit.

It claimed it was entitled to both the first dispensing fee of €5 and three additional phased fees of €3.27 each. This boosted income by up to €600 a year for each medical-card patient.

The HSE said only the initial €5 fee should be reimbursed. Lloyds strongly resisted the claims but eventually agreed a settlement.