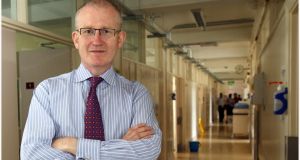 Dr Chris Fitzpatrick resigned from the board overseeing the relocation of the hospital to a religious-owned site. Photograph Brenda Fitzsimons

The HSE says it regrets the decision by former master of the Coombe Dr Chris Fitzpatrick to resign from his role in planning the relocation of the National Maternity Hospital (NMH).

Dr Fitzpatrick resigned on Thursday from the board overseeing the relocation of the hospital to a religious-owned site at St Vincent’s.

In a statement, the HSE thanked Dr Fitzpatrick for his work on the board as a representative of the clinical programme in obstetrics and gynaecology.

The planned relocation of the hospital should not go ahead unless ownership issues can be sorted out, according to a group representing women using maternity services.

The Association for the Improvement of Maternity Services (Aims) Ireland said one option for future maternity services would be to build two new “super-hospitals” to other locations and provide a network of midwife-led units, as suggested in the Government’s national maternity strategy.

The group said it has been “inundated” by contacts from women using maternity services who are seeking clarity on the controversy over the move of the NMH to the site at St Vincent’s owned by the Sisters of Charity.

Dr Fitzpatrick said he had no confidence that the significant changes expected in obstetric practices over the next 10 years would be provided at a hospital with “a strong Catholic ethos”.

Speaking on RTÉ’s Today show, he said he would “find it hard to work under these circumstances”.

“To the casual bystander it must seem strange in the 21st century to have a maternity hospital owned by a religious order.”

“To hear references to triple lock, golden share – this is not the way to run a maternity hospital. It guarantees confusion.”

Ms O’Reilly said she knows Dr Boylan to be a man of “great compassion and skill” and remarked that the citizens of Ireland would be concerned over the war of words regarding the ongoing disagreement about patronage of the facility.

An online petition calling for the transfer of ownership to be “blocked” has been signed by almost 97,000 people.

At a press conference, Aims Ireland called on the Sisters of Charity to detail exactly what services will and will not be possible at the hospital. It also called on the Government to clarify the position in future church-State partnerships to be funded with public money.

“We want definitive answers to the following questions from the Sisters of Charity,” said Krysia Lynch, chair of association. “If the Eight Amendment is repealed and abortion legalised, will this be carried out on the site? If a woman wishes to have a medical sterilisation through choice, can that procedure be carried out under the agreement between the NMH and St Vincent’s?”

The order could take the heat out of the controversy by publishing the ethos it is “duty bound” to impose on the new hospital, she suggested.

Meanwhile, a pro-choice group has said it is organising a protest in Dublin on May 7th against the decision to grant ownership of the NMH to the order.