Organ donation: ‘I wouldn’t be here but for that person’ 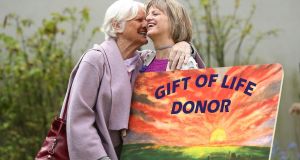 Cliona Marley, with her mother Joan, underwent a heart transplant in 2014. Cliona was ‘speechless’ with gratitude for unknown donor. Photograph: Conor McCabe

Growing up in a busy household in Letterkenny, Co Donegal, Cliona Marley remembers being glad she was treated no differently from any of her three siblings.

Yet Cliona was different. The only child with a congenital heart condition, she underwent her first major operation when aged just six. For three decades, the cardiac team at the Mater hospital stabilised her condition to such an extent that she was able to lead a mostly ordinary life.

Over the years, she married and had three children, but as the medication became less effective and her valves started to shut down, her options narrowed. At first, it was a choice between getting her heart valves fixed or a transplant.

“It wasn’t really something I wanted to go through, it was 50:50 whether surgery would work, we took a gamble and said we’d try the surgery,” Cliona recalls.

Sadly, her condition deteriorated: “I didn’t even make it as far as the doors of the Mater.” That left only one option to save her life – a heart transplant.

She spent 180 days in hospital away from her husband Paul and family being kept alive with a pump. Finally, in the summer of 2014, a suitable heart donor was found and her life was saved.

Speaking yesterday at the launch of Organ Donor Awareness Week, Cliona said she was “speechless” with gratitude for the unknown donor who gave her “the gift of life”.

“It has meant so much to my family. I was able to bring my daughter to her first day at school, and attend my brother’s wedding last September. Yet I know the biggest joys I have experienced are sorrows for someone else; every day, I realise I wouldn’t be here today but for that person.”

Dr Ron Grainger has, arguably, an unmatched – if largely undesired – familiarity with kidney transplants. As a urologist, he performed numerous transplants in the old Jervis Street hospital; as a patient, he is the recipient of a donor kidney, as is his brother, and as was his father.

Ron says he has enjoyed “a wonderful quality of life” in the 13 years since he received a new kidney at the age of 53. “In just the first few days after the transplant I began to feel so much better. I haven’t been as fit as I am currently in many years.”

With 600 people on the waiting list for transplants, he strongly believes people need to consider organ donation in the event of their death or at least to “have the conversation” within their families.

From Castleknock in Dublin, Ron has autosomal dominant polycystic kidney disease, an inherited condition that causes small, fluid-filled sacs, or cysts, to develop in the kidneys.

As he was finishing school, his father was beginning dialysis. “In those days, dialysis was really tough and he would be sick most of the time.” Eventually, his father became the second patient to receive a kidney transplant in Belfast, and his donated organ lasted 20 years before he died of unrelated causes.

Ron was in his 30s before it was confirmed that his kidneys would decline in the same way. “Having carried out the transplants, I knew what was coming down the tracks for me, probably in my early 50s.

“Even though I was fatigued most of the time, I was determined not to let my illness define who I was. I worked as hard as I could in a busy job,” he says.

At age 53, however, he was placed on the transplant list and a match was found within weeks. Now retired, he is the Irish ambassador in the global Fit for Life initiative which encourages patients to live as healthy a life as possible post-transplant.