Plain packaging for cigarettes to begin in September 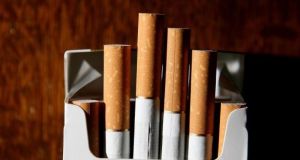 Ireland will become the fourth country in the world to introduce plain packaging for tobacco products, the Government has announced.

The measure, which is designed to make tobacco packs less attractive to consumers, takes effect on September 30th, though any products already manufactured by that date may be sold for another year.

The new legislation, which was strongly resisted by the tobacco industry, also makes health warnings more prominent and aims to prevent packaging from misleading consumers about the harmful effects of tobacco.

From September, all logos and other forms of branding must be removed from packs, which must be sold in a plain, neutral colour.

Standardised packaging will reduce the attractiveness of tobacco products and forms a key part of Ireland’s strategy to reduce tobacco use, particularly uptake among children and young people,” said Ms Corcoran Kennedy.

The Irish Cancer Society said the legislation was another significant milestone towards the target of a tobacco free Ireland by 2025. Evidence in Australia has shown plain packaging, combined with increases in excise rates, can cut smoking rates, it said.

Pro-tobacco group Forest Ireland described the measure as “gesture politics” and predicted it would not work.