‘Meningitis is a lethal disease. There is no doubt . . . It really is quite catastrophic’ 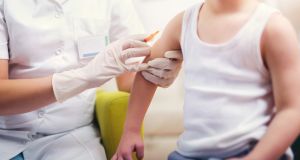 Eleven cases of meningococcal meningitis have been notified to the Health Protection Surveillance Centre since the last week in December. Three of those patients died directly due to the infection. File photograph: Getty Images

The Health Service Executive has said it is “stunning” that the uptake for meningitis vaccines is not hitting its target after pressure exerted on the organisation to provide it to the public.

Eleven cases of meningococcal meningitis have been notified to the Health Protection Surveillance Centre since the last week in December. Three of those patients died directly due to the infection.

The 11 cases contrast with the five cases of meningococcal meningitis reported in the same time period last year. In 2018 a total of 89 meningococcal cases were reported, compared with 76 in 2017.

There were a total of seven deaths from meningococcal meningitis in 2017.

Dr Kevin Kelleher, the HSE’s assistant national director for public and child health, said on Thursday that many children were being left unprotected as parents were failing to have them vaccinated.

“After all the pressure on us to get the vaccines to deal with meningitis, the uptake rates are not hitting the 95 per cent mark,” he said.

“What is very disappointing is seeing that the boosters that we give to 12- and 13-month-olds are not being taken up. Some of the difficulty we are facing at the moment is that we are not getting all the babies vaccinated.

“It is stunning to imagine, after all the issues we went through, that now our uptake rates are around 88-90 per cent. That leaves quite a lot of children unprotected from it over the years as a consequence.

“It’s been going on for quite a number of years but it’s really important that those boosters happen. Parents have to make sure they take their child along twice, at 12 months and 13 months to get those boosters.”

Dr Kelleher said the provision of the vaccine had led to a “massive decrease” in instances of the condition in the Republic. “We can’t afford for it to slip out of control just because we are not hitting those targets,” he said.

“Meningitis is a lethal disease. There is no doubt about that. It isn’t just deaths. It causes some of the most horrendous problems. There are famous cases in Ireland of young people losing limbs and things of that nature. It really is quite catastrophic.”

“This is thought to be due to the bacteria being able to invade the body more easily via the nose and throat at this time of year due to recent infection with flu virus, and because the bacteria can spread more rapidly when people spend longer periods indoors in close proximity,” she said.

“Meningococcal bacteria are transmitted from person to person by close contact with others such as coughing, sneezing, kissing etc, but usually we have to be in very close or regular contact with someone for the bacteria to pass between us.

“Even when this happens, most of us will not become ill because we have natural immunity. The bacteria cannot live longer than a few moments outside the human body, so they are not carried on things like clothes and bedding, toys or dishes.

“We encourage everyone to take up the offer of all the vaccines that are included in routine immunisation schedule to protect themselves and their families.”