‘If we had waited another 20 minutes, he would have died’

Catching meningitis in time is not about hours, but minutes, says one survivor’s mother 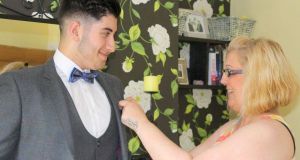 Koray McGowan with his mother, Jacintha.

Koray McGowan (21) is lucky to be alive as three years ago his flu-like symptoms turned out to be a deadly case of meningitis.

It was thanks to “maternal instinct” that his mother, Jacintha, rushed him to hospital where he was diagnosed and treated successfully.

“He complained of a bad headache and pains all over, so I sent him to bed after school as I thought he needed sleep,” she says. “He asked me to close the curtains as his eyes hurt but I didn’t think anything of it as this can also happen with flu. When I checked on him a few hours later, he was feeling worse, so I left him to sleep some more. But then at about 8pm he threw up what looked like green water.

“His feet and hands were freezing but his body was burning up so I knew something was wrong and he needed to get to hospital fast.”

The Sligo woman helped her son to the car and raced to the nearest hospital where she immediately asked for help as he couldn’t walk. Koray had his temperature checked and, although it was very high, was told to wait until further assistance was available.

“He was taken into triage and a nurse took blood for testing as they thought he had a virus of some sort. Very shortly after this, his breathing became laboured and I was advised to keep him talking and alert or he would slip into unconsciousness.

“This was scary and really difficult as he was in so much pain and didn’t want to open his eyes, but I managed to get him into a standing position for a few minutes before he had to lie down again, and it was then I noticed the red spots on his body.”

This, a tell-tale sign of meningitis, caused the mother-of-one to become very alarmed and she alerted a nurse, who immediately sought the assistance of a medical team.

“There were suddenly loads of doctors around Koray and one gave him a drip with antibiotics just in case it was meningitis,” she says. “This began to work while they waited for results to confirm their suspicions and, thank God, it did, as I was told if we had waited another 20 minutes, he would have died.”

Jacintha says it is vital for people to be aware of how important it is to act fast. “Catching meningitis in time is not about hours, it’s about minutes so people need to get help if they are at all concerned,” she says.

“It’s hard to put into words how it feels,” says Koray. “Try thinking of a regular headache and a regular stomach pain and multiple it by 10 – if anyone has anything like that, don’t wait to find out if it is flu, there isn’t time.”

My daily routine living with . . . tell us about your health experience
6

Lip service: The rise and rise of cosmetic procedures in Ireland
Real news has value SUBSCRIBE