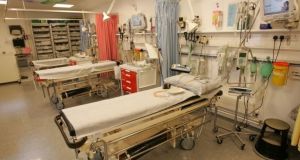 The number of patients waiting for admission to hospital has reached its highest level this year - long after the surge traditionally caused by the winter flu season.

There were 631 patients waiting for beds Tuesday morning, according the Irish Nurses and Midwives Organisation’s TrolleyWatch count. This included 465 patients on trolleys in the emergency department, and a further 166 in wards elsewhere in hospitals.

The worst-hit hospital was University Hospital Limerick, with 55 patients waiting for admission.

UHL has been the worst affected hospital for overcrowding for most of the last year, and last week set daily record for any hospital of 81 patients waiting for a bed.

Over the past week, overcrowding in hospitals in the greater Dublin region has surged; on Tuesday morning, Beaumont, Naas and Tallaght hospital all had more than 30 patients waiting for admission.

The unexpected surge in trolley numbers at this year, coming at the end of a particularly mild winter, is being attributed to the current cold snap, as well as growing numbers of presentations by older patients with complex medical conditions.

This comes as the INMO have confirmed that over 631 people are on trolleys today.

“We are now near the middle of April, the worst of the winter flu crisis is over. It is a sad state of affairs that these types of figures are not shocking people anymore.

“The INMO have not recorded a day where there has been less than 250 people on trolleys. We should not have to accept these kind of figures as the new normal.”