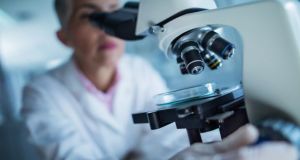 Women are now having to wait up to 33 weeks for the results of their smear tests, as the delays in the CervicalCheck programme reach record levels. Image: iStock.

Additional laboratories overseas have been found to process Irish women’s tests under the CervicalCheck programme and alleviate delays, now standing at a record level of up to 33 weeks.

The Health Service Executive says it has sourced lab capacity in a number of countries and is finalising arrangements for them to test Irish samples. The process of ensuring the labs are properly qualified to carry out the work will take several weeks after which women will be contacted about the timeframe for providing them with test results, it says.

There was “no possibility” of sourcing the additional capacity required to clear the backlog in Ireland in the required timeframe, it says in a briefing note prepared for the Oireachtas health committee.

The maximum wait has increased by about six weeks since the start of the year, according to the HSE. The normal waiting time for test results in the cervical cancer screening programme was four to six weeks until last year, when a surge in demand overwhelmed capacity in the testing laboratories.

The backlog currently stands at just under 79,500, and average processing times are also at their longest since the problem began. Under normal conditions, about 23,000 slides would be in processing at any one time.

The delays pose “a very low risk” to women, according to the HSE. To mitigate the problem, samples from high-risk groups are being prioritised, and where tests in the backlog are at risk of reaching the storage limit of six months for HPV testing, this form of testing is being carried out on the samples first.

The HSE says the increase is due to “understandable concerns” about cervical screening. At the height of the controversy almost a year ago, Minister for Health Simon Harris approved free out-of-cycle tests for women under the programme.

The HSE says the increased workload has led to “long and very regrettable delays” in the reporting of results. “We are sorry about these delays. We are making every effort to improve the situation.”

According to the note, CervicalCheck is confident a lab can be attracted to carry out HPV testing but no date is given for the introduction of the service.

About 1,000 women have had to be recalled to repeat their smear tests because of the massive backlog in the screening programme, the note also says.

As a result of the delays, some samples expired before they were transferred to slides for testing, and repeat testing was required in about 1,000 cases, it says.

Affected women and their GPs have been contacted by the CervicalCheck cancer screening programme. The problem has been resolved since the HSE last year instructed labs to stabilise samples on glass slides, so expiry issues no longer arise.

TDs asked about delays in results from a contracted laboratory Medlab, which provided rests of private tests within two weeks, while HSE contracted tests were taking much longer.

“Women are being told their tests have expired and must come back in for another repeat smear, having sought the repeat test in the first place because they were worried,” she added

“It was meant to be a reassurance smear test. What is the Government doing to fix it? Where is the extra capacity? Where are the extra resources? When will the backlog be cleared?” she asked Mr Coveney.

Ms Chambers claimed Minister for Health Simon Harris had “single-handedly caused this backlog and he has failed to get to grips with it”.

Independent TD Joan Collins asked “how can a private smear test be prioritised over the 78,000 women” seeking results. This had to be clarified, she said.

Mr Coveney said the HSE has sourced additional “capacity” and was working with a number of countries to do test analysis. The health service was trying to finalise arrangement to incorporate this extra capacity into the CervicalCheck screening programme.

“This is a capacity issue. We cannot develop increased capacity here in Ireland in the short-term so we need to source it in other parts of the world,” he said.

“This is what the HSE is endeavouring to do at the moment and, for the first time, I have a note that suggests it has secured capacity and is trying to finalise contractual arrangements in this regard.