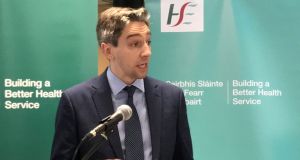 Minister for Health Simon Harris is expected to propose a new process to deal with the two-tier pay issue at the IMO conference on Saturday. File image: Michelle Devane/PA Wire

Hospital consultants and non-consultant hospital doctors will jointly ballot for industrial action if the Government does not move to end the two-tier pay system for consultants, the Irish Medical Organisation (IMO) has said.

Minister for Health Simon Harris told the annual conference of the doctor’s trade union in Killarney on Saturday that he wanted to put in place a process to deal with the issue of lower-pay arrangements for medical specialists appointed since 2012.

Doctors believe it could cost up to €40 million to fully reverse the 30 per cent pay cut unilaterally imposed on consultants appointed after 2012.

The Minister said he had promised last year to work with the IMO to tackle problems facing GPs and he believed that had now been accomplished as part of a proposed new €210 million deal. He said he now pledged to work with the IMO on addressing the new-entrant consultant pay issue.

He said the Government was committed to increasing the consultant workforce to facilitate the delivery of its reform and service development programmes.

The Minister said there were significant recruitment and retention challenges and that the Public Service Pay Commission had recognised that the pay gap between longer-serving and newer-entrant consultants - which medical organisations say could be up to €50,000 a year - to be a key factor.

Mr Harris said he would work with the IMO to identify the most appropriate process to be established.

He said issues were resolved through engagement and not through industrial action, adding engagement on the issue should take place soon.

However, the IMO said any new process had to be “unique” to consultants and could not be mixed in with a broader move to deal with lower pay arrangements for recent entrants across the wider public service.

IMO chief executive Susan Clyne said the organisation wanted to see the proposed new process put in place without delay, and for full pay equality to be delivered as soon as possible.

She said the IMO wanted to see a reversal of the new entrant pay cuts for consultants this year.

Ms Clyne said the IMO took the Minister at his word but said any new process would have to be meaningful and have to be concluded speedily.

The chairman of the IMO consultants’ committee Dr Clive Kilgallen said IMO was determined to end the lower-pay arrangements in place for medical specialists appointed since October 2012.

Dr Kilgallen said the IMO was prepared to take all necessary steps to end the two-tier system and, if Minister for Health Simon Harris did not bring forward proposals to deal with it, the organisation would have no option but to ballot doctors for industrial action in hospitals.

Such action would involve both consultants and non-consultant hospital doctors, the IMO said.