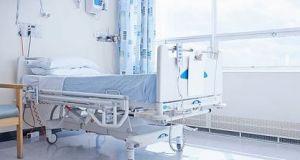 Clare TD Michael McNamara said legislation allowed for patients with health insurance to be billed for stays in private rooms and multi-occupancy rooms, but “a corridor is not a room”. Photograph: Getty Images

The family of a man accommodated on a trolley in a hospital corridor was charged €813 a night for his stay after he died, the Dáil has heard.

Independent TD Michael McNamara, who said the man was in University Hospital Limerick, told Tánaiste Leo Varadkar that he raised the issue with the Minister for Health, who referred it to the hospital. The hospital in turn said in-patient and day-case charges were based on the Health Act.

However, the Clare TD, a barrister, said the legislation allowed for patients with health insurance to be billed for stays in private rooms and multi-occupancy rooms, but he said “a corridor is not a room”.

The patient, a constituent of the TD, stayed three nights in the hospital, his final night in a private room, but Mr McNamara said the legislation does not provide any lawful basis to bill people accommodated in a corridor.

Calling on the Tánaiste to confirm that a corridor is not a room, he suggested that if Mr Varadkar had been offered a corridor to sleep in when he travelled for work his officials would not have paid for the room.

And he warned there would inevitably be an expensive court case to sort out this “anomaly” if the Government continued to treat a trolley in a corridor as a multi-occupancy room.

Mr Varadkar said patients opting to be treated privately pay a fee “not just for the bed” but for a consultant and other services provided by the hospital.

He said it was Government policy that users of private services in public hospitals should pay towards the cost of providing those services.

He said charges were a matter for the HSE, but added that “perhaps it would be sensible for the HSE not to charge for the first night if the patient ends up spending that night on a trolley or sitting on a chair, but that is a decision for the HSE to make”.

It was “positive to see that the level of overcrowding in our hospitals is at its lowest in many years, if not since records began”.