Householders will ‘light fire’ with Covid-19 plan due to confusion, Labour leader says 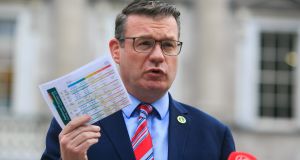 Households will “light the fire” with the Government’s plan for living with Covid-19 instead of reading it because of confusion about nationwide restrictions, Labour leader Alan Kelly has said.

The Labour Party held an emergency parliamentary party meeting on Thursday afternoon to discuss concerns about differing levels of coronavirus restrictions around the country.

On Wednesday night the Government announced that Cavan, Monaghan and Donegal would progress to Level Four restrictions. Alongside this was a new restriction which bans all visits between households both indoors and outdoors across Ireland.

“After the announcement by the Government in relation to their next phase, we had a discussion and today we had an impromptu parliamentary party meeting. We did so because all of my colleagues, all of us, never took so many phone calls from people who are confused. Particularly from the elderly who are very upset at what was announced,” Mr Kelly said.

“We really feel the Government needs to change the course.”

He said the Living with Covid plan has five stages, not “interval stages”.

“Hybrids are not good. The Government needs to stick to the plan. There is utter confusion out there. We have a country at one level, Level 3. We have Dublin at a slightly hybrid level, and now, we have everyone else in the country whereby visits to households are banned except where somebody is vulnerable, or for childcare or essential purposes.”

“The Government needs to stick to what was published. Unless they change tack, this will be irrelevant. It will be used for lighting the fire rather than being studied.”

He was highlighting the changing restrictions in relation to the household visiting numbers at a time when the country has not moved from one level to the next.

Mr Kelly added that the original five-step plan needs to be adhered to in order “to save Christmas”.

“That might come across as bit Disney-like. We do need to cut through to the public. But the way we are going and the trajectory of the disease we will not have a decent Christmas for families, employers, the retail sector.”

Mr Kelly added that the public needed hope and a plan for the next six weeks in order to get to December.

Taoiseach Micheál Martin spoke with Mr Kelly on the phone on Wednesday night which the Labour TD described as “frank”.

The Labour Party has also called for “household bubbles” whereby one small family group will stick to seeing each other. Mr Kelly said his party will support a move to Level 4 next week if it comes about.