Gerry Feeney treated with ‘no dignity’ in Beaumont, niece says 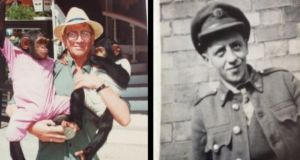 Gerry Feeney in undated photographs supplied by his family. Left, while on a trip abroad, and right, when he was in the Army, which he joined at age 18. 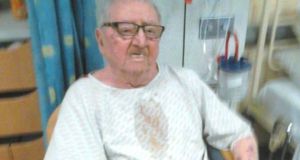 Gerry Feeney in Beaumont hospital on December 19th last. The complaint focuses on a failure to offer Mr Feeney the most basic of nursing care 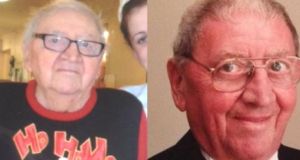 Gerry Feeney (left) in December 2013 and at an undated family wedding.

Gerry Feeney was known for his sharp intellect, generous nature and his love of living life to the fullest.

The second eldest in a family of 10, the Dubliner was referred to fondly as a “walking encyclopaedia” of knowledge.

However, his family claims in his final weeks of life the 81-year-old was treated with “no dignity” as he sat helplessly in a “soiled state, in public view” while in the care of Beaumont Hospital for respiratory problems.

Mr Feeney died in a nursing home on January 31st, three weeks after being discharged from the hospital.

Beaumont Hospital has confirmed it is conducting an investigation into the complaints from the family.

Ann-Maria Feeney, a niece of the dead man, said it was deeply traumatising for the family to see Mr Feeney so distressed about his care at the hospital.

“Gerry said to my aunt, ‘I’m neglected, I’m neglected’. He actually cried. It was terrible,” she said.

“He was actually left sitting out in public... in a soiled state. The pictures don’t depict the sheer horror of what happened, he was left in an incontinence pad which was left full, he was not covered. He had no dignity.”

Ms Feeney said her uncle was getting blood tests at the hospital when he was initially admitted by a doctor who was concerned about his breathing on December 8th last.

She said he was discharged the next day by a different doctor, and returned to Raheny House Nursing Home. Two days later the nursing home, worried about his breathing difficulties, called an ambulance to bring Mr Feeney back to the hospital.

“They felt he should not have been discharged initially as his breathing was very, very chronic,” Ms Feeney said.

She said her uncle then spent five days in the hospital’s emergency department overflow ward, St Patrick’s Unit, where he was treated “very well”.

“The crowding in the A&E department got so bad he was moved to geriatric ward. He should have been put in an acute respiratory ward in his condition,” she said.

Ms Feeney said it was in the geriatric ward Mr Feeney was treated with no dignity.

“He was treated as if he was invisible. His whole bottom half wasn’t covered. Everyone could see the state he was in including, visiting family members walking by.”

The family didn’t know how he was fed, she said, “given most of his food was all down him. He should have had an aid, somebody helping him, given his Parkinson’s.”

Ms Feeney said Mr Feeney, who grew up in Donnycarney in Dublin, was a well-travelled and healthy man before the onset of Parkinson’s.

She said he had been in the Army from 18 to 21 years of age, and spent his working life as a foreman with Aer Lingus.

“He was very dedicated to his job. He was always well-groomed, very proud of his appearance - old school - you could see your face in his shoes, they were so shiny. Also, you could smell the aftershave off him before you would see him,” she said.

“It was very distressing for him to be left ungroomed and unchanged.”

Ms Feeney said her uncle had inspired all of his 21 nieces and nephews to want to travel with his tales from the different cities he visited all over the world.

“You just loved him. He never forgot any of us, a very generous man. He was also absolutely mad about horses, he could tell you every horse that ran in every place. Gerry was much loved,” she said.

“We’re speaking out because there should be dignity in death. We don’t want another patient to be left in a vulnerable position like this. This is no way to treat people. So what if people are at the end of their lives - it’s not acceptable for them to be treated like this,” she said.

Ms Feeney said her uncle was discharged from the hospital on January 9th and died three weeks later at the nursing home.

Since becoming aware of the complaint, Beaumont Hospital has been collating information on the case.

The hospital said the investigation would be conducted by internal and external experts and the terms of reference were being finalised.

“It is expected that the process will take a number of weeks,” it said.

It is to liaise with the family throughout the process and the outcome would be shared with them in the first instance.

It said it regretted the serious issues and concerns raised by the family.