The first day of phase three of the country’s reopening from lockdown saw pubs, churchs and hairdressers reopen their doors. Video: Enda O'Dowd 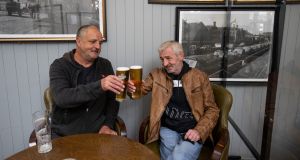 Barry Richardson and Michael Crowley with their pints at the Galway Hooker Bar at Heuston Station. Photograph: Tom Honan

It is 9.50am on Monday morning, the first day of Phase Three of the country’s reopening from lockdown, and publican Hugh Hourican looks a little nervous.

He is about to open the doors of the Boar’s Head early house on Capel Street to the public for the first time in 15 weeks.

Hourican is not worried that nobody will show up. Just the opposite; he is worried about crowds of pint-starved Dubliners crowding in and scaring off his regular early house crowd of shift-workers and, in the past at least, tourists.

For this reason he decided to not to advertise the pub’s reopening and to start business on Monday at 10am rather than the usual 7am.

“People haven’t been in a pub for 15 weeks. They forget how to behave. You’d be worried about the social distancing and some people were probably drinking maybe a little too much at home.”

Central to Hourican’s thinking is not ruining it for others. “We want to show we are responsible businesspeople and publicans. It’s up to us to set it up for the other publicans that want to open at July 20th.”

The Boar’s Head is one of about 450 pubs reopening this week in Dublin, roughly 60 per cent of the total. Only pubs serving hot meals, costing a minimum of €9, can reopen and customers can stay for a maximum of 105 minutes. Social distancing must be maintained meaning no seats at the bar and, in some cases, the erection of plastic screens between tables.

On July 20th pubs can reopen without serving a hot meal, assuming the Covid-19 infections numbers remain on the right track.

Hourican did not feel the need to put up screens and no one is wearing a mask but the rest of the regulations will be followed “to the letter”, he says.

The clock strikes 10am and then 10.10am. No rowdy groups of lads pile through the door, only two other pub owners dropping in to wish the staff good luck.

The slow start is not a concern for Hourican. He takes out a black ledger containing the bookings for the rest of the week. Today, all the time slots are fully booked from 12am to closing time. Most of the coming weekend is similar. “If I was this busy normally on a Monday, I’d be delighted.”

Further up Capel Street, Slattery’s early house has been open since 7am. “On a normal day we’d get a lot of night workers and on Monday you get lots from the hospitals. Also Penneys’ workers in from doing the stock overnight and tourists arriving on the red eye,” says owner Brian Conlon.

Sixty per cent of Slattery’s business comes from tourists, he says. “We won’t have them but we’ll be looking forward to getting the locals back and the shoppers. Hopefully people haven’t gotten too used to shopping from their couch.”

The frontline workers usually come in from about 8.30am and Conlon says he already has a few booked in. For now its mostly pub industry types and journalists reporting on the reopening – coffee is the main drink of choice.

One exception is John Geraghty who runs Publin, a blog dedicated to the history and culture of Dublin pubs. He sits in front of a freshly poured pint of stout. “It tastes good. The pubs want to get it right [after reopening]. We’re only half a kilometre from St James’s Gate so they’re probably going to get it right.”

Does he know of any other time pubs had to close for such an extended period? “I went looking in the archives and could find nothing similar to this, even during 1916 or the Spanish Flu. There were complaints about not being able to get supplies from Guinness during the Rising but no mentions of closures.”

At the bar, newly hired staff member Becky Roche looks slightly flustered. Every time she pulls a pint a bank of camera flashes go off with photographers instructing her like they might a fashion model: “Towards me” ... “tilt it forward”…“turn it so we can see the logo, lovely”.

“I’d never even heard of an early house before this,” Roche confesses.

A garda saunters in: “Everything alright here lads?” He and the barman have a quiet conversation before the garda leaves, apparently satisfied.

The Galway Hooker Bar at Heuston Station is an early house catering to train travellers, night workers, and, according to manager Paul McKevitt “auld lads waiting for their regular pubs to open”.

Unlike Slattery’s or the Boar’s Head it has screens up between tables. In the corner, between two of them is Barry Richardson who has just finished work and is enjoying a pint of lager.

“It’s the social aspect for me,” he says when asked what drew him back to the pub this morning. Can he see the pub scene going back to normal anytime soon? “No, not with all these,” he says nodding towards the plastic dividers. “It will change the whole industry.”

The publicans seem more upbeat at least. “This is different to the last recession. The publicans are a lot more upbeat and people still have money,” says Hourican. “If we can reduce or get rid of the social distancing by November I think we’ll have a bumper Christmas.”