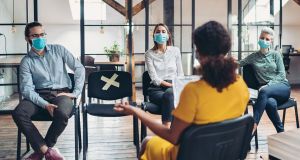 Speaking to a friend when infected with coronavirus could be as dangerous as coughing near them thanks to lingering particles, new research suggests.

Covid-19 can be spread through a number of routes, including virus-containing droplets emitted when an infected person breaths, speaks or coughs – a factor experts say could help to explain why Covid seems to spread more easily in indoor settings.

Although large droplets fall to the ground over short distances, tiny droplets known as aerosols can carry the virus over distances greater than two metres, and linger.

You need masks, you need distancing and you need good ventilation so the viral particles don’t build up in an indoor space and they are safely removed

Now experts have developed models to explore the risk posed by large droplets and aerosols, and explore ways to mitigate it. Their results suggest it takes just a couple of seconds for expelled particles to travel beyond two metres.

“You need masks, you need distancing and you need good ventilation so these particles don’t build up in an indoor space and they are safely removed,” says Prof Pedro Magalhães de Oliveira, an expert in fluid mechanics at the University of Cambridge who is one of the authors of the study.

Writing in the journal Proceedings of the Royal Society A, de Oliveira and colleagues report how they built models that take into account the size of droplets emitted from infected individuals when they speak or cough, as well as factors including the makeup of the droplets and the time it takes for them to settle.

The team also looked at infection risk, taking into account the viral load of individuals with Covid, and the estimated dose required to cause an infection - the latter was based on studies of a different coronavirus.

The team concluded it was unsafe to stand without a mask two metres away from an infected person who is talking or coughing, with both situations posing an infection risk.

The team add that an hour after an infected person has spoken for 30 seconds the total aerosol left contains much more viral mass than after one cough – adding that in small spaces and without ventilation this might be enough to cause Covid.

“Speaking is a very important issue that has to be considered, because it produces much finer particles [than coughing], and these particles, or aerosol, can be suspended for over an hour in amounts that are sufficient to cause the disease,” says de Oliveira.

But whether people would catch Covid, he says, depends on how much of the aerosol they breath in – which is influenced by factors including whether masks are worn, whether the situation is indoors, levels of ventilation and the distance between the people involved.

The team have used their work to develop an online calculator, called Airborne.cam, for users to explore their risk of becoming infected indoors via airborne particles alone.

According to the tool, spending one hour in a 250sq m store – assumed to have a maximum capacity of 50 people and ventilation on a par with offices’ – results in an individual having around an 8 per cent estimated chance of becoming infected with coronavirus, assuming there are five infected people in the store and no one is wearing a mask.

If ventilation is improved so the air is renewed five times an hour rather than three times, this risk can be cut to less than 2 per cent; a similar drop can be gained if everyone wears three-ply face masks.

While the infection risks are only theoretical estimates, and are not specific to the new UK coronavirus variant, the team says the tool can help users to explore ways to stay safe in different scenarios.

“The idea is not to obtain absolute risk figures from the tool but to use it to see how mitigation strategies impact risk of infection. It can be used to rank these strategies, for example,” says de Oliveira.

Prof Catherine Noakes,a member of the UK Scientific Advisory Group for Emergencies, or Sage, and an expert in airborne infections at the University of Leeds, welcomes the study but cautions that the results are based on a number of assumptions.

“It is likely that the results represent realistic worst-case scenarios, as the model uses quite a high viral load as one of the assumptions, and this has a significant influence on the risk that is predicted,” she says, adding that viral load varies between people and through the course of the disease. – Guardian