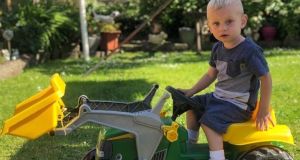 Jayce Lyons from Limerick who is recovering from Covid-19. Photograph supplied by family

The parents of a two-and-half-year-old boy who tested positive for COVID-19, warned people to heed expert medical advice about the virus and “stay indoors” to stop it spreading.

Jayce Lyons received a positive result for coronavirus on Friday, six days after being tested for the disease.

“When I heard (he’d tested positive) you’d actually swear that my child was after being found dead with the cries out of me,” said Laura Lyons, Jayce’s mother.

“He’s up and about, but he’s still coughing bad now.”

She warned parents to be vigilant and if their children have symptoms, that they trust their gut instinct and seek a virus test if they felt it was required.

“I would say take it seriously. I wasn’t taking it serious until it came knocking at my own front door with my own child,” she admitted.

Ms Lyons (21) also warned other young people to stop gathering in groups and to “stay inside” until the virus is gone.

“Everyone still thinks it’s a joke, but it’s not. Just stay in until it’s all clear.”

“It’s the elderly you have to worry about too, and who you are bringing it home to. It’s worse for people that have (medical) problems,” she added.

Jayce began feeling sick five weeks ago and developed a bad cough, and a runny nose. He was diagnosed with a chest infection and given a prescription for an antibiotic by his general practitioner.

“After he was finished (the antibiotic) he was still choking with a bad cough”, Ms Lyons said.

His mother said she felt like she “had to fight to get a (hospital) appointment for my child”.

His father Dylan Williams said they did all they could at home for their son, but in the end, he said, they felt they had not other choice but to bring him to hospital.

“I (knew) something was wrong,” Ms Lyons said.

The boy is currently “self isolating” at home.

His mother advised others not to ignore the virus warning signs: “I’m showing symptoms myself and I’m still waiting on a test for myself, we are all self isolating.”

She explained that she remains worried for her son and her close circle of family and friends.

“It’s very worrying. We have just one (child), he’s my one and only. Hopefully this is the end of it.”

Some larger stores to reopen on Monday ahead of schedule 19:54
Third man charged in connection with attempted murder of Christy Keane 19:16
House parties are being held ‘with abandon’, Holohan warns 19:10
Two teenage girls charged with murder of Cian English on Gold Coast 19:06
Direct provision system not comparable with a man killed by police - Varadkar 18:38