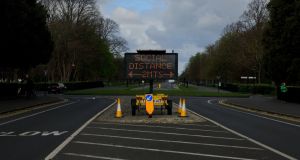 Irish Covid-19 infection rates rose by a higher percentage than elsewhere in Europe during the middle of April, according to a report from the European Centre for Disease Control and Prevention (ECDC).

Warning against the lifting of public restrictions too quickly, the Rapid Risk Assessment ninth update from the ECDC notes that the first wave of Covid-19 has passed its peak in 20 EU and EEA (European Economic Area) countries.

However, it said in Ireland, together with Sweden and the UK, the “14-day incidence is increasing and is currently at the highest level observed in each country since the start of the pandemic”. According to the ECDC, the 14-day incidence is a measure of the prevalence of active cases in the population.

However, a series of medical experts cautioned against over-interpretation of the ECDC’s numbers, saying “extreme caution” is required in creating Covid-19 “league tables” so early in the disease’s history.

In addition, while Ireland is carrying out an average number of tests compared to other EU states, it is carrying out more than the 10 countries against whom it performed worst in this table.

The numbers in mid-April are also inflated by the arrival of older test results in Ireland from a German laboratory.

The report notes an increasing number of outbreaks in long-term care homes across Europe with high associated mortality rates highlighting the “extreme vulnerability” of the elderly.

The ECDC cautions against any moves that would lift restrictions put in place to control the spread too quickly. Such measures have helped reduce transmission rates by 18 per cent since April 8th.

“These measures are highly disruptive to society, both economically and socially. This is why there is significant interest in defining a sound approach to adjusting the measures and phasing out ‘stay-at-home’ policies,” it said.

“However, lifting measures too quickly, without appropriate monitoring and health system capacity in place, may cause a sudden resurgence of sustained community transmission.”

The question posed now is how to balance the need to safeguard public health with some sort of return to economic and social activity, something the Joint European Roadmap towards lifting Covid-19 containment measures seeks to address.

In a statement the Department of Health said: “The NPHET [National Public Health Emergency Team] monitors and reports daily on case information relating to Covid-19.

“The cumulative growth rate in cases has continued to reduce and is now approaching zero while the Reproduction number in Ireland is now estimated at between 0.5 and 0.8.

“Data continues to be reported and assessed across a range of sources including numbers hospitalised, numbers admitted to intensive care, mortality and recovery rates.

“All of this information, together with the work of the IEMAG [Irish Epidemiological Modelling Advisory Group] is monitored and used to inform decision making.”