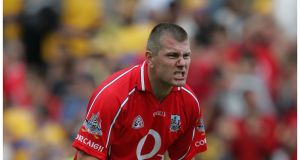 Former Cork hurler Diarmuid O’Sullivan said ‘I absolutely enjoyed the physicality of hurling and I do not think there is any need to try and remove it from the game’. Photograph: The Irish Times

He wasn’t called ‘The Rock’ for nothing but former Cork hurler, Diarmuid O’Sullivan has welcomed a suggestion by Donegal consultant surgeon, Dr Kevin Moran that doctors should attend all GAA games to decide if injured players are fit to play on after a collision.

The three-time All-Ireland winner was involved in some bone crunching shoulders, delivering memorable hits such as that when Mr O’Sullivan blew Limerick forward Jack Foley out of his way when scoring a 100 yard point for Cork in 2001.

That collision with Foley was likened to being hit by a truck and Dr Moran has described some of the injuries he has treated after football matches such as collapsed lungs as being more akin to crash injuries.

However, Mr O’Sullivan said he believes Gaelic games must retain their physical edge.

He said close encounters with Dan Shanahan and Seamus Prendergast of Waterford may be the stuff of hurling folklore but he instanced another clash with burly Tipp forward John Carroll which left him winded as highlighting the importance of getting back up and into the fray.

“Physicality is part of hurling but it’s also about psychology, you can’t show any weakness. I remember if I was marking a guy and he showed weakness, I used to go to town on him. You knew then you had the measure of your direct opponent and you were on top of him.”

Mr O’Sullivan said while hurling remained a less physical game than football, even allowing for improvements in diet and strength and conditioning, he believed it was important and would hate to see physicality removed or curtailed.

Mr O’Sullivan who played football for Cork for a year said he was always sorer after playing a football match than a hurling match.

Mr O’Sullivan played AIL rugby with Highfield and Midleton and believes the GAA might follow the example of the IRFU in terms of introducing Head Injury Assessments though he concedes the test is more relevant to football than hurling.

“The GAA brought in the helmet rule so head injuries in hurling are few and far between. But hurling and football are like flat racing and jump racing, they are different sports and maybe with collisions in football, you could look at something like the HIA in rugby.

“But generally I think player welfare is well looked after by the GAA. Most inter-county teams have doctors on the sideline. We have two doctors with the Cork hurlers and even my club, Cloyne would always have a doctor on the sideline for a championship match.”

Mr O’Sullivan reckoned hurling and probably football are not necessarily any more physical than 20 years ago but he believed that players are faster and fitter now so that when players are involved in collisions, they are hitting each other at greater speed and with more impact.

“It’s inevitable if players are bigger and faster and fitter that you are going to have bigger impacts but the worst injury I ever saw on a hurling pitch wasn’t from a collision but was when my brother, Paudie broke his leg when he fell awkwardly after an innocuous challenge,” he says

“I watched the Kilkenny Waterford match last Sunday and it was one the toughest games I’ve seen in a long while with lots of hard hitting, there was great ferocity to it but there was no malice and no serious injuries of consequence. Guys just got up and played on. That is the way it should be.”