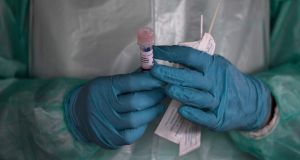 A health worker holds test kits before taking a swab to collect samples for Covid-19 coronavirus from people in Gombak on the outskirts of Kuala Lumpur. Photograph: Mohd Rasfan/AFP via Getty Images

Delays in reaching the weekly target of 100,000 coronavirus tests until the third week in May raise doubts about the State’s capacity to lift lockdown restriction when they expire next week.

Health Service Executive chief executive Paul Reid said the health service would not reach the weekly target until later in May – after the latest restrictions expire on May 5th – despite its concerns about the capacity to meet the target set by by the Department of Health’s health emergency team 10 days ago.

The 100,000 weekly tests is a critical step to help public-health experts track infection rates as lockdown measures are relaxed in order to assess whether they are leading to new Covid-19 cases.

The weeks-long delay in meeting the testing target emerged as the department reported that another 26 people died from coronavirus, bringing the death toll to 1,087 in the Republic. There were a further 701 new confirmed cases, bringing the total number of known cases to 19,262.

Mr Reid said the HSE had been operating on a “war zone” footing since the crisis began but a more sustainable model was needed to manage the virus “well into 2020, mostly likely into 2021”.

He acknowledged that there were “constructive tensions” between the HSE and the department after its emergency team announce plans to ramp up testing to 100,000 suspected cases a week.

The department said that “intense effort” was under way to set up a rapid testing system but it sidestepped a question about whether the delay in reaching target would lead to restrictions being extended beyond May 5th.

Last night, Dr Mary Favier, president of the Irish College of General Practitioners, warned that – beyond testing – without a ramping up of “critical” contact tracing to identify others infected by a new case, there would be “a further inevitable surge in infection rates” that would place “significant additional pressures” on GPs and the wider healthcare services.

New figures released on Sunday showed the already heavy strain being felt across the health system as it tackles the coronavirus pandemic that has killed more than 205,000 people around the globe.

There are about 4,500 HSE staff out of work, either on sick leave in self-insolation with the virus or suspected symptoms or for other reasons such as difficulties in finding childcare.

The HSE’s chief operations officer Anne O’Connor said at its weekly press briefing on Sunday that the absentee rate was a “challenge” for the health service.

It emerged at the briefing that only 150 private consultants have signed up to work as public-hospital consultants since the crisis began with the first Irish case on February 29th.

Efforts to help increase testing capacity are extending beyond the public sector.

One of the country’s largest universities, UCD, is asking the public to help the State’s main virus research lab ramp up testing capacity to be able to help efforts to lift lockdown measures.

The public is being asked to contribute to a €1 million fundraising campaign that would increase Covid-19 testing capacity at the State’s National Virus Reference Laboratory – a key coronavirus testing hub – by 3,000 tests a day, from 7,000 to 10,000.

UCD Foundation, the university’s charitable fundraising arm, said the crowdfunding campaign would fund the purchase of personal protective equipment and hand sanitiser to keep the lab running on constantly rotating work shift so as to create capacity to add a further 21,000 tests a week, a fifth of the HSE’s weekly target.

The campaign aims “to save time and fill in the gaps” to support increased testing during the relaxation of lockdown measures, said UCD Foundation’s head of annual giving Mark McDonnell.

“As everyone’s attention turns to easing restrictions safely, we want to help in as far as possible with whatever steps we can to avoid overburdening our hospitals with new cases,” he said.