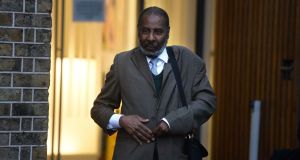 A locum GP has been found not guilty of poor professional performance over his treatment of an elderly patient at an out-of-hours consultation.

The fitness to practise committee of the Medical Council described the conduct of Dr Salaheldin Ahmed as “suboptimal” and “not ideal” in some aspects but said it did not meet the threshold to make a finding of poor professional performance.

Key to the finding of the committee was the evidence of Prof Colin Bradley of UCC, who was called as an expert witness by Dr Ahmed. He said that while aspects of the doctor’s conduct was suboptimal, taking into account the work pressures on out-of-hours doctors, they did not meet the threshold for a finding of poor professional performance.

Dr Ahmed was not present yesterday for the decision due to a “communications breakdown” between the legal teams, the inquiry heard.

Dr Ahmed, with an address in Cavan, had faced five allegations of poor professional performance at the Medical Council over the care he provided to the late Louis Kinsella in April 2017.

He had denied two allegations before the inquiry that he failed to properly examine or take an adequate history of Mr Kinsella during his visit, but these were found to be proven as to fact.

In her evidence to the inquiry, Mr Kinsella’s wife, Anna, said she called the out-of-hours GP service when her husband, who had Alzheimer’s, became very ill.

She said Dr Ahmed, in a brief visit on April 15th, 2017, failed to examine her husband, take his blood pressure or pulse, or test a urine sample she had ready.

The committee found the history and notes taken by Dr Ahmed were inadequate. But it also noted “differing views” between Prof Bradley and an expert witness called by the Medical Council, Prof Tom Fahey of RCSI.

Mr Kinsella was admitted to hospital the following day, where an X-ray showed evidence of lung cancer and treatment was discontinued. He died in May 2017.

Dr Ahmed told the inquiry he went to see the patient, and he asked questions about symptoms and past medical history. He found the patient appeared comfortable and did not look dehydrated other than his lips were dry.

‘Unlikely in the extreme’

“I agreed with Mrs Kinsella’s request not to disturb him and said he would benefit from Dioralyte. She was satisfied with that and I left.”

The committee rejected his claim that Mrs Kinsella asked for her husband not to be disturbed, saying it was “unlikely in the extreme” that someone who had phoned the doctor three times in the preceding days would then wish for a patient not to be examined.