Move by Bolsonaro, who has downplayed Covid-19, has potential to cause a major public revolt 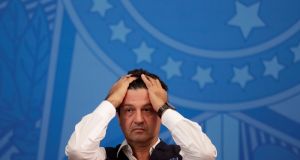 Brazil’s health minister Luiz Henrique Mandetta: he has defended social isolation, while the president insists the impact of the pandemic on Brazil’s struggling economy is more important than loss of life. Photograph: Reuters

Brazil’s president Jair Bolsonaro has sacked his popular health minister Luiz Henrique Mandetta after a weeks-long standoff between the two men over radically different views of the coronavirus pandemic.

“I have just received notice of my dismissal from the president Jair Bolsonaro. I would like to say thank you for the opportunity that was given to me to manage our health service and to plan our fight against the coronavirus epidemic, this great challenge that our health system is about to face,” Mr Mandetta tweeted on Thursday.

Mr Mandetta has defended social isolation, while the far-right president insists the impact of the pandemic on Brazil’s struggling economy is more important than loss of life.

Mr Bolsonaro’s downplaying of coronavirus – and his public call for Brazil to relax quarantine measures and get back to work – have appalled critics and many citizens, sparking nightly pot-banging protests in major cities.

Mr Bolsonaro’s efforts to undermine regional governments’ efforts to enforce such shutdowns have sparked a political rebellion by the governors of nearly all of Brazil’s 27 states.

Recent modelling by researchers from Imperial College London suggested Brazil could have more than 1.1 million Covid-19 deaths if no action were taken to control the pandemic; 529,000 if only elderly people were forced to isolate; and 44,200 if drastic measures were implemented.

Mr Mandetta’s dismissal has the potential to cause a major public revolt. Earlier this month research by one of Brazil’s top pollsters showed 76 per cent of Brazilians backed the health ministry’s response to coronavirus under Mr Mandetta, while only 33 per cent backed Mr Bolsonaro’s.

Such a move would further isolate the right-wing populist and could provoke “a political reaction of major proportions”, Colon wrote in the Folha de São Paulo newspaper.

However, Colon warned that Mr Mandetta’s removal would also be bad news for the health of Brazil’s 209 million citizens. – Guardian