Covid-19 tracing: ‘It is like a juggernaut; it is very hard to slow it down’

The HSE had to dramatically increase it's contact tracers as cases surged during the second wave of Covid-19. Video: Enda O'Dowd 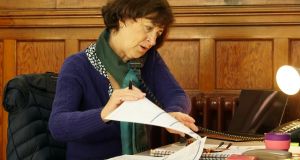 Mary Walshe has 35 years’ experience as a nurse and volunteers part-time as a contact tracer at the UCD contact tracing centre.

Mary Walshe does not want to call the man back because he was unwell and breathless just from walking down his stairs at home to answer her phone call.

Her call, from UCD’s Carysfort campus in Dublin, was one of thousands made by contact tracers on Tuesday from eight centres across the country.

The tracers must contact people infected with Covid-19, identify their close contacts and then call those contacts to get them tested and self-isolating.

Explaining the case, Walshe said her call should have been to the man’s wife but she became very ill on Saturday and was brought to a hospital in Dublin. It all comes at a difficult time for the family; they have just suffered a family bereavement overseas and could not travel to the funeral.

“He was saying: ‘How much worse can it get?’ This is what we are seeing a lot of. It is not just the sickness. You are seeing the whole impact it is having on society,” said the contact tracer.

You let them talk. You give them time to vent their stress
and anxieties

Walshe, a general nurse who is also a member of the 30-strong team of contact tracers at UCD, makes what contact tracers identify as “call ones” and “call twos” – the first is to inform a patient they are Covid positive and the second to collect their close contacts. She leaves “call threes” – calls to close contacts to ensure that they get tested – to other contact tracers.

Her most complex “super-spreader” case involved contacting 29 mostly elderly people who had attended a funeral where they were in close contact with a woman who tested positive.

“You let them talk. You give them time to vent their stress and anxieties,” she said.

Across the hall, Eamonn Gormley, a professor from UCD’s veterinary school and now a chief investigator in the contact tracing centre, is just off the phone with a man who tested positive.

The Kildare man contacted met a relative and a friend in a bar on Friday night. The other two have no symptoms. Gormley thinks he might have caught the virus in the bar. The man has the Covid app on his phone so that might show how he became infected.

Gormley says his job is to make sure the virus does not spread further and to get all contacts “into the net and restricting their movements”. Catching asymptomatic spreaders quickly is key.

His most complex case was a young woman who worked while symptomatic for a week in a restaurant in the southwest, serving hundreds of customers and working closely with more than 30 staff. She also attended a family gathering with relatives from different parts of the country.

“That one person who was symptomatic for that whole week potentially spread it to hundreds of people over the space of the August Bank Holiday week,” said Gormley.

On Saturday, he spoke to two people who each had at least 30 contacts from socialising.

The shortest calls can take 25 minutes; the longest two hours, especially if there are language difficulties. The UCD centre has staff with different languages and uses a translation service.

Since new cases began increasing again in August, the scale of the contact tracing work has increased significantly. The average number of contacts has risen from two in April to 6½ for each infected person. Four hundred new cases can mean thousands of contacts and calls.

“We are doing 2,500-3,000 calls every day on a consistent basis and that is a real stress and strain,” said Kilian McGrane, the HSE’s lead for contact tracing.

Contact tracing has gone from the quiet days of June and July when McGrane said a colleague described the work as playing Hungry Hippos with tracers rushing to grab a small number of cases to playing Whack-a-mole now as tracers struggle to deal with new cases popping up.

People are tired of it all and they just want to get on with their lives. Now you are seeing a lot more contacts

On Tuesday, a typical day, there was a constant hum of noise from telephone conversations in the contact tracing centre. In recent weeks, contact tracers making “call threes” have been noticing increasing levels of aggression from people who claim “there is no such thing as Covid – it is a myth, a government conspiracy”, said McGrane. It makes their work more difficult.

Mary Codd, an associate professor of epidemiology at UCD’s School of Public Health who runs the contact tracing centre, says most people are very receptive and are often expecting the calls.

“Regrettably, we do have some people who feel somehow aggrieved or set upon but then putting yourself in their shoes you have to understand that they may be under pressure in work or to return to work or be at work, or they may have very responsible positions,” she said.

The contact tracers share stories of people flouting the public health advice: people attending large family gatherings and house parties, or young people returning from sun holidays in non-green list countries who knew they had to self-quarantine for two weeks on their return but forgot about the risk of infecting others on the plane or public transport on the way home.

The calls can be difficult and stressful. Rita Collins, another contact tracer, recalls one man, a case on her desk, who asked if she could call him back later because he was having lunch with a friend and another man who kept saying “blah, blah, blah” every time she tried to speak.

Gormley fears complacency has set in among the public because there has not been a surge in deaths. In contrast to April’s wave, contact tracers are finding more infected young people and asymptomatic cases who “feel fine” and don’t understand why they should self-isolate.

John Furlong, a scientist from UCD’s vet school and a volunteer contact tracer, has had two concerning cases cross his desk in recent days. One woman with lung cancer felt she deserved “a little bit of a break” after treatment and caught the virus after going out for dinner with a friend.

“She let her guard down for a short period of time and she got it,” said Furlong.

Another woman, originally from South America with an autoimmune disease, thought her fatigue was down to her underlying condition but it turned out she had Covid. Over a weekend, between being swabbed and getting her positive result, she socialised with 15 friends.

“At the beginning everyone was so much more careful. Now people are tired of it all and they just want to get on with their lives. Now you are seeing a lot more contacts,” said Furlong.

He is fearful about the coming weeks.

“The rate of increase is too much now at this stage. It is like a juggernaut. It is very hard to slow it down,” he said, scanning the call files on the desk in front of him.

“I feel like we are going to have to go up to the next level at this stage after three weeks, particularly after seeing all these contacts with people.”